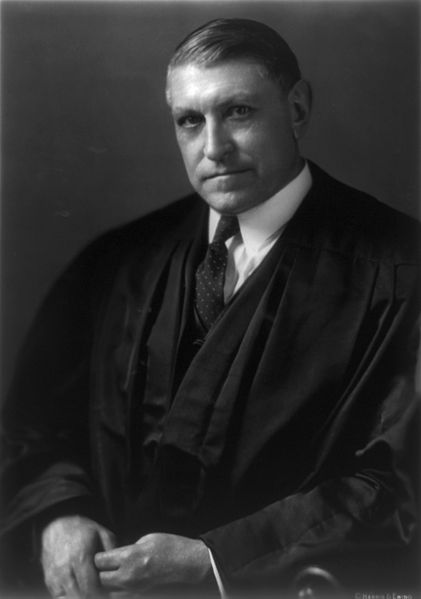 Owen J. Roberts (1875–1955), a lawyer and professor, served on the Supreme Court from 1930 until 1945. Although perhaps best known for allegedly switching his vote regarding the constitutionality of New Deal–era legislation in West Coast Hotel Co. v. Parrish (1937) — the so-called switch in time that saved nine — Roberts wrote several landmark decisions regarding free expression protected by the First Amendment. Notable among them are Herndon v. Lowry (1937), Hague v. Committee for Industrial Organization (1939), Cantwell v. Connecticut (1940), and Taylor v. Mississippi (1943).

Born in Philadelphia, Roberts earned undergraduate and law degrees at the University of Pennsylvania. He began his undergraduate work at age 16 and graduated Phi Beta Kappa. After finishing first in his class in law school, in 1898, he began private practice with a Philadelphia law firm and also taught part-time at his alma mater. He then served as a special deputy attorney general for the Eastern District of Pennsylvania, where he prosecuted some of those charged with violating the Espionage Act of 1917. In 1924 he was special counsel to the United States, investigating the Teapot Dome scandal: he obtained a conviction for Albert B. Fall, former secretary of the interior, for accepting bribes and taking part in a conspiracy. In 1930, when the Senate rejected President Herbert Hoover’s nominee to the Supreme Court, John J. Parker, Hoover nominated Roberts, who was unanimously confirmed.

On the Court, Roberts generally was known for protecting First Amendment freedoms. In Herndon v. Lowry, he wrote an opinion striking down the conviction of an African American member of the Communist Party on the ground that the state had not demonstrated that the literature the defendant had distributed called for the violent overthrow of the government.

Roberts’s majority opinion in Hague v. Committee for Industrial Organization, where he wrote that public streets and parks “have immemorially been held in trust for the use of the public,” stands as the progenitor of the modern public forum doctrine.

His opinion in Cantwell v. Connecticut reversed the conviction of three Jehovah’s Witnesses (Newton Cantwell and his two sons) for soliciting religious contributions door to door and in the public streets. In this case, Roberts extended the free exercise clause to the states through the due process clause of the Fourteenth Amendment.

In Taylor v. Mississippi, Roberts wrote an opinion striking down a Mississippi statute that prohibited individuals, in this case a Jehovah’s Witness, from counseling others against saluting the American flag.

Some of Roberts’s eloquent language remains a celebrated part of First Amendment lore, including his words in Cantwell v. Connecticut: “In the realm of religious faith, and in that of political belief, sharp differences arise. . . . In both fields the tenets of one man may seem the rankest error to his neighbor. . . . But the people of this nation have ordained in the light of history, that, in spite of the probability of excesses and abuses, these liberties are, in the long view, essential to enlightened opinion and right conduct on the part of the citizens of a democracy.”

Roberts resigned from the Court in 1945 to pursue other interests. He served as president of the Pennsylvania Bar Association and, in 1948, became dean of the University of Pennsylvania Law School. He also published a collection of his lectures, The Court and the Constitution: The Oliver Wendell Holmes Lectures (1951).