By Brett Curry (Updated June 2017 by David L. Hudson Jr.)
Other articles in Judges and Justices 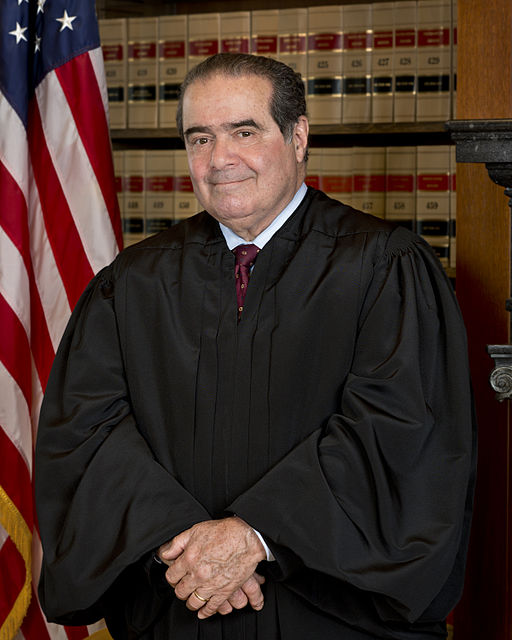 Supreme Court Justice Antonin Scalia was one of the modern Supreme Court's most passionate conservative voices. He believed that the First Amendment's free speech protection is not limited to individuals, writing that corporations also have free speech rights. He also emphasized historical tradition in voting to uphold governmental activities involving religion. (2013 photo from Collection of the Supreme Court, public domain)

Antonin Scalia (1936–2016) was nominated to the Supreme Court by President Ronald Reagan in 1986. He succeeded Justice William H. Rehnquist, who had been elevated to chief justice.

Scalia was an originalist

On the Court, Scalia gained a reputation as a staunch conservative, whose philosophy of originalism stressed the importance of text and historical tradition in interpreting the Constitution.

Scalia viewed First Amendment protections in a narrow, but occasionally libertarian, fashion. In his view, “the principal role of the Court in the area of civil liberties is to prevent the government from ‘backsliding’ in its protection of long-recognized personal liberties.” However, the expansion of rights should be left to elected politicians and not the courts (Rossum 2006: 140).

In his approach to the First Amendment’s religion clauses, Scalia’s originalism produced a narrow interpretation of those clauses.

Emphasizing historical tradition and constitutional text, Scalia consistently voted to uphold governmental activities in the face of establishment clause challenges. According to Scalia, the First Amendment does not prohibit official preferences of religion over nonreligion, and only bars official activities that may promote the interests of a particular religious sect.

He believed that governmental acknowledgment, accommodation, and support of religion are well-established tenets of the nation’s political and cultural heritage, and he lamented in Lee v. Weisman (1992) that the Court’s “Religion Clause jurisprudence has become bedeviled (so to speak) by reliance on formulaic abstractions that are not derived from, but positively conflict with, our long-accepted constitutional traditions.”

Scalia also had a narrow view of the free exercise clause

Scalia’s free exercise clause jurisprudence was similarly circumscribed and drew on a distinction between belief and conduct.

According to Scalia, the First Amendment prohibits government from regulating religious beliefs or from targeting certain acts only when they are performed in religious contexts. However, as he stated in Employment Division, Department of Human Resources of Oregon v. Smith (1990), Scalia did not believe the Constitution requires that “an individual’s religious beliefs excuse him from compliance with an otherwise valid law [in this case a law criminalizing the use of peyote, which was a regular feature of the Native American Church] prohibiting conduct that the State is free to regulate.”

Indeed, the clearest expression of Scalia’s view that the free exercise clause does not mandate religious exemptions from otherwise neutral laws — provided the state has a rational basis for enacting those laws — is his majority opinion in Employment Division.

As for the free speech and free press clauses, Scalia found that their chief purpose is to protect the communication of political ideas.

He did not interpret the First Amendment as protecting “inconsequential forms of expression” such as obscenity or nude dancing, but he afforded flag burning constitutional protection, because “when government bans certain conduct precisely because of its communicative attributes” that regulation is unconstitutional.

For that reason, in Texas v. Johnson (1989) and United States v. Eichman (1990) Scalia voted with the five-member majority to strike down flag-burning laws. However, as in his approach to the free exercise clause, Scalia did not reason that general laws that regulate expressive conduct are unconstitutional, provided they are not specifically directed toward expression.

Scalia resisted the expansion of obscenity from sexual materials to violent-themed materials in Brown v. Entertainment Merchants Ass’n (2011).  Scalia wrote the Court’s majority opinion invalidating a California law regulating the sale or rental of violent video games to minors.  “Our cases have been clear that the obscenity exception to the First Amendment does not cover whatever a legislature finds shocking, but only depictions of ‘sexual conduct,’” he wrote.

Scalia’s emphasis on the communication of political ideas was not limited to individuals.

He also equated money with political speech and contended that groups and corporations have a constitutional right to pool funds in order to publicize their views.

In Citizens United v. FEC (2010), Scalia authored a concurring opinion explaining that American history did not show the Founders’ distaste for corporations. Scalia explained that many early printing companies were organized as corporations.  He also emphasized the text of the First Amendment does not exclude corporate speakers: “The [First] Amendment is written in terms of 'speech,' not speakers. Its text offers no foothold  for excluding any category of speaker, from single individuals to partnerships of individuals, to unincorporated associations of individuals, to incorporated associations of individuals — and the dissent offers no evidence about the original meaning of the text to support any such exclusion.”

Armed with his wit, intellectual verve, and originalist philosophy of constitutional interpretation, Antonin Scalia was one of the modern Supreme Court’s most passionate conservative voices.

This article was originally published in 2009 and updated in 2017. Brett Curry is Professor of Political Science at Georgia Southern University. His research centers on aspects of judicial politics and decision making. His scholarship has been published in a number of journals including the Journal of Politics, Law & Society Review, Law & Social Inquiry, American Politics Research, and Justice System Journal. He also coauthored two book--U.S. Attorneys, Political Control, and Career Ambition (2019, with Banks Miller) and Decision Making by the Modern Supreme Court (2011, with Richard Pacelle and Bryan Marshall).