By Artemus Ward
Other articles in Judges and Justices 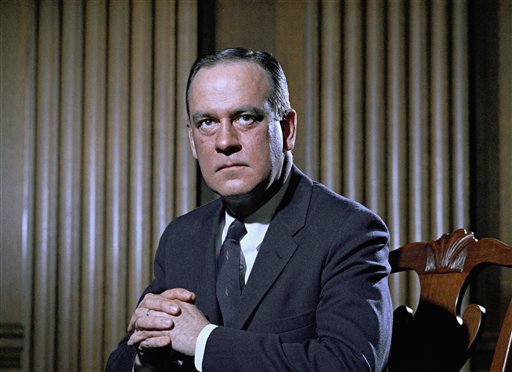 Potter Stewart, associate justice of the US Supreme Court in 1967. Stewart had a mixed record in First Amendment cases but was often supportive of individual liberty in cases involving speech and religion. (AP Photo/Charles Tasnadi, used with permission from the Associated Press)

Potter Stewart (1915–1985), associate justice of the Supreme Court from 1958 to 1981, is frequently remembered for his famous nondefinition of obscenity: “I know it when I see it.” Stewart began his service on the Court during an era when many justices still wrote their own opinions, and his pithy prose resulted in a number of famous quotations, such as the one on pornography.

Stewart was a moderate justice overall

Although Stewart was a nominal Republican at the time his judicial career began, overall he was a moderate justice, splitting his votes evenly between his more conservative and liberal colleagues. His record in First Amendment cases was mixed, but he was more often supportive of individual liberty than not in cases involving speech and religion. For example, in the 1,550 civil liberties cases in which he participated, he voted with the liberals 51% of the time. Yet in 274 First Amendment cases, a subset of civil liberties, he voted in the liberal direction 64% of the time, generally supporting the individual over the state.

Stewart was born in Jackson, Michigan. He grew up in an upper-class family in Cincinnati, where his father served as mayor and later was a justice of the Ohio Supreme Court. After attending Yale University and Yale Law School, Stewart worked on Wall Street and served as a navy officer during World War II. After the war, he returned to Cincinnati to work in private practice. He was elected to the city council and served as vice mayor, though he failed to win reelection to the city council after he accused two other city council members and a city planning director of being Communists. Many of the charges were baseless, and Stewart’s vocal accusations cost him his seat.

In 1954 President Dwight D. Eisenhower appointed Stewart to the Sixth Circuit Court of Appeals. Four years later, Eisenhower tapped him again for a recess appointment to the Supreme Court. Despite opposition from some Southern senators who feared that he would support racial integration, Stewart, who had already been serving as a justice for nearly a year, was confirmed, 70-17, by the Senate. At age 43, he was one of the youngest people ever to serve on the nation’s highest court.

At the time of Stewart’s confirmation, the Court had been struggling for decades to develop a coherent definition of and a framework for First Amendment cases involving obscenity and pornography. In their attempts to balance freedom of speech and expression against the state’s ability to protect the health, safety, welfare, and morals of the people through their inherent police power, the justices ultimately determined that they would have to examine pornography issues on a case-by-case basis.

The Court articulated this ad hoc approach in Jacobellis v. Ohio (1964), which involved the prosecution of a movie operator, Nico Jacobellis, for showing The Lovers, a film that the state said was obscene. Stewart’s separate opinion in Jacobellis reflected the frustration of many justices in deciding pornography cases. Stewart concluded that criminal obscenity laws were permissible only when applied to “hard-core pornography.” He continued, “I shall not today attempt further to define the kinds of material I understand to be embraced within that shorthand description, and perhaps I could never succeed in intelligibly doing so. But I know it when I see it, and the motion picture involved in this case is not that.”

Although Stewart’s positions in obscenity and pornography cases generally were protective of speech, his overall record involving speech and press freedoms was mixed. For example, in Edwards v. South Carolina (1963), Stewart’s majority opinion held that a state could not criminalize the peaceful expression of unpopular views — in this case, those of civil rights demonstrators. In Gannett Co. v. DePasquale (1979), which involved freedom of the press, Stewart’s majority opinion held that judges had “an affirmative constitutional duty to minimize the effects of prejudicial pretrial publicity” and therefore could close proceedings to the press. Although he ruled against the media, Stewart’s reasoning demonstrated a concern for the rights of the criminally accused.

Another of his better known opinions was his dissenting opinion in a reporters’ privilege decision, Branzburg v. Hayes (1972). In that case the plurality ruled that reporters had no First Amendment–based privilege to refuse to divulge information from a confidential source in the face of a grand jury subpoena. Stewart wrote that “the Court’s crabbed view of the First Amendment reflects a disturbing insensitivity to the critical role of an independent press in our society.”

Stewart believed in the importance of the free exercise clause

In two landmark cases, Engel v. Vitale (1962) and Abington School District v. Schempp (1963), the Court struck down state-authored school prayer and Bible reading under the First Amendment’s establishment of religion clause, despite the fact that students could choose not to participate in these activities by leaving the classroom. Stewart wrote the lone dissent in both cases. In Engel, he said, “I cannot see how an ‘official religion’ is established by letting those who want to say a prayer say it.” He stated that the free exercise clause meant only that government could not coerce one’s religious beliefs and that the establishment clause merely forbade an official government church. Stewart’s opinion became increasingly influential over the years as conservative justices were appointed to the bench and adopted his reasoning.

In another free exercise case, Sherbert v. Verner (1963), Stewart joined the liberal majority, which held that a state could not deny unemployment benefits to a worker who was fired because her religious beliefs forbade her from working on Saturdays. He wrote a separate concurrence, however, explaining how the liberals’ expansive interpretation of the establishment clause conflicted with their position on the free exercise clause and how he believed that free exercise was preeminent: “I am convinced that no liberty is more essential to the continued vitality of the free society which our Constitution guarantees than is the religious liberty protected by the Free Exercise Clause.”