By Jane G. Rainey
Other articles in Religious Perspectives and Churches 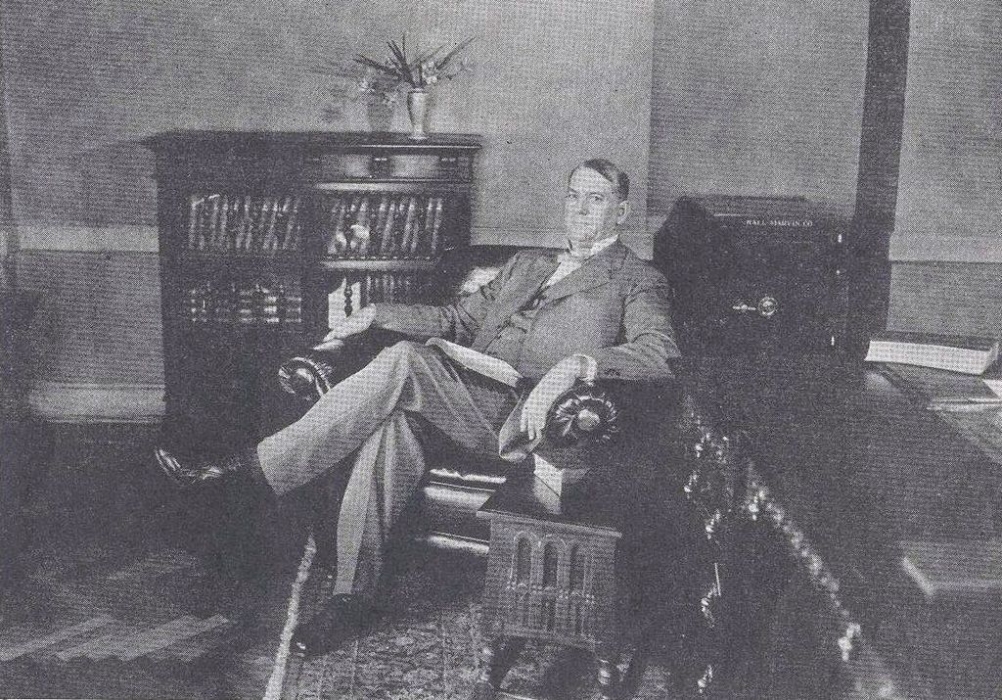 Joseph Rutherford was the second leader of the the Jehovah's Witnesses.  Under Rutherford, the movement formed its own legal department to defend members who were persecuted for their speech and faith. Perhaps no religious sect has had a greater impact relative to its size on expanding the First Amendment free exercise of religion than has the Jehovah’s Witnesses. (This 1928 photo of Rutherford appeared in the 1928 Messenger, via Wikimedia Commons, public domain.)

Perhaps no religious sect has had a greater impact relative to its size on expanding the First Amendment free exercise of religion than has the Jehovah’s Witnesses. Apart from their many legal battles, Jehovah’s Witnesses avoid contact with the state. They do not lobby, vote, or otherwise try to influence public policy.

Jehovah's Witness group was founded in the 1870s

Charles Russell Taze founded the group in Pittsburgh in the 1870s. The organization consisted of the Watchtower Bible and Tract Society, which published literature about the Bible, and “Bible study circles,” which devoted themselves to intense study of the group’s literature and to its sale and distribution door-to-door and on the streets.

The movement’s adherents initially called themselves Bible Students until 1931, when they took the name Jehovah’s Witnesses. Jehovah is a transliteration of the letters YHWH, which were used in place of the unspeakable name for God in the Old Testament. The group shares similarities with Christian denominations, although they do not recognize Christ as divine, instead placing him in an exalted position.

In 1900 the Watchtower Society headquarters moved to its present location in Brooklyn, New York.

Beginning in 1916 under the movement’s second leader, Joseph F. Rutherford, a lawyer from Missouri, central control over the faithful was tightened, and the modern movement began to take shape. Local groups built Kingdom Halls for their meetings and elaborate reporting systems were developed to allow the central leadership to keep abreast of and exercise control over local activities. Rutherford held strong and unpopular views, including hatred of capitalism and disdain of other clergy.

Under Rutherford, the Jehovah’s Witnesses developed their own legal department to defend members who took to the streets to proclaim their faith and who might find themselves in situations arousing conflict. They also drafted elaborate legal plans and instructed their followers on how to respond when arrested and how to behave in court. The American Civil Liberties Union aided Witnesses in some major cases.

The Witnesses ran afoul of the law as early as World War I because of their pacifist stance and their refusal to take oaths. Some were arrested under the Sedition Act of 1918, “the only time in American history when almost all the leaders of a denomination were in jail” (Conkin 1997: 152).

The Witnesses also went to court to defend their right under the free exercise clause to refuse blood transfusions based on their religious beliefs. They have won legal victories protecting the rights of adults in this regard, but the courts have sided with compelling state interests where children are involved.

A Jehovah’s Witness provided the occasion for the Supreme Court’s “fighting words” ruling in Chaplinsky v. New Hampshire (1942), in which the Court unanimously decided that Walter Chaplinsky’s abusive, face-to-face name-calling, aimed at a city marshal, would likely cause the “average person” to retaliate, were not essential to reasonable discourse, and thus were not protected speech.

Because Witnesses were instructed to remain courteous in their encounters with the police, however, this case seems somewhat of an aberration and not truly a defining part of the Witnesses’ struggle for their free exercise rights.

Door-to-door and street evangelizing and saluting the flag are by far the two areas in which the Jehovah’s Witnesses have made their most profound contribution to shaping interpretations of the free exercise and free speech clauses.

The Witnesses’ first important legal victory protecting their style of evangelism came in Lovell v. City of Griffin (1938), in which the Witnesses challenged the broad discretionary powers of a city manager in Georgia to decide who could hand out printed materials on the streets. The Court found that in the absence of clear standards and procedures in deciding who to license, this was a violation of the already incorporated free speech clause of the First Amendment.

The Witnesses won a major legal victory in Cantwell v. Connecticut (1940), a landmark case involving the discretionary power of government officials to issue permits for solicitation and a charge of disturbing the peace by playing an inflammatory anti-Catholic message on a record player after first asking permission of a passer-by.

The Court upheld the Witnesses on both counts. This ruling incorporated the free exercise clause of the First Amendment into the Fourteenth Amendment to make the former applicable to the states. The case expanded the concept of free exercise in its suggestion that although the state could regulate actions performed in the name of religion, the power to regulate must be narrowly confined to avoid whenever possible weakening a person’s religious freedom.

Between 1939 and 1950, the Witnesses won 14 of 19 Supreme Court cases involving the distribution of literature and permit requirements.

The Jehovah’s Witnesses believe that saluting flags, including that of the United States, is tantamount to worshipping a graven image.

They were not the first group to resist mandatory recitation of the Pledge of Allegiance in public schools, but their resistance was the most widespread, coordinated, and uncompromising. It was also successful.

In 1935 elementary and secondary schools across the country began expelling Jehovah’s Witnesses for their refusal to salute the flag. These actions came at a time when growing numbers of states were incorporating the pledge into the school day and, coincidentally, at the same time that Witnesses were being persecuted in Germany for refusing to give the “Heil Hitler” salute required by the National Socialist government.

Beatings, whippings, and other violence accompanied some expulsions in the United States, often with the blessing or participation of local law enforcement officials.

The Witnesses’ early legal efforts to obtain relief from the courts failed.

Judges refused to treat their religious beliefs seriously and held that the schools had the right to demand patriotism, including respect for the flag, from their students.

The Supreme Court agreed to hear a case from Minersville, Pennsylvania, involving a 12-year-old, Lillian Gobitas (a court clerk’s error changed the family’s last name to “Gobitis”), who had been punished for refusing to salute the flag although no law required it at the time.

The Gobitas family won their case in the lower courts, but the Supreme Court ruled against them, 8-1. The majority opinion in Minersville School District v. Gobitis (1940) stressed the importance of empowering legislatures to promote unity in the face of the growing threat of Germany. In a lone dissent, Justice Harlan Fiske Stone countered by drawing a distinction between voluntary and compulsory expressions of loyalty and questioned whether compelling students to violate their religious convictions would produce the desired result.

Violence against the Jehovah’s Witnesses, including beatings, destruction of Kingdom Halls, and at least one castration, escalated after the Gobitis decision.

The American Legion, in particular, was linked to more than 100 vigilante episodes. Some newspaper editors and religious and national leaders condemned the violence and criticized the Court’s role in inadvertently instigating it.

In 1942 Justices Hugo L. Black, William O. Douglas, and Francis W. Murphy from the Gobitis majority announced a change of heart in Jones v. City of Opelika. Aided by the presence of two new justices, they overturned Gobitis in West Virginia State Board of Education v. Barnette (1943) by a 6-3 vote.

Justice Robert H. Jackson’s majority opinion extended beyond the religious scruples of the Witnesses to hold that no one for whatever reason could be compelled to salute the flag: “If there is any fixed star in our constitutional constellation, it is that no official, high or petty, can prescribe what shall be orthodox in politics, nationalism, religion, or other matters of opinion or force citizens to confess by word or act their faith therein.”

The Jehovah’s Witnesses have since had fewer encounters of the sort that led them to seek relief at the Supreme Court level, but they retain their legal department.

In a relatively recent case, the high court ruled 8-1 in their favor in Watchtower Bible and Tract Society v. Village of Stratton (2002), which involved permits for canvassing. In this instance, Stratton, Ohio, required canvassers going to private residences to first obtain a free permit by filling out a rather complicated form (that included listing all the premises to be visited), to carry the permit with them as they canvassed, and to respect the wishes of residences that had filed a “no solicitation” form and posted a “no solicitation” sign. (The Witnesses did not challenge this last condition.)

Justice John Paul Stevens, writing for the Court, reviewed previous Witness cases and framed this decision as a continuation of the Court’s commitment to protecting the ability of “little people” to promote their causes by means affordable to them, the anonymity of those who for various reasons did not want their names linked to the causes they promoted, the ability to engage in spontaneous speech that would be hindered by the permit process, and the beliefs of those religious persons, such as the Witnesses, who feel that their commitment to do the will of a higher power prohibits them from seeking the permission of a petty official.

Chief Justice William H. Rehnquist in his dissent turned the tables, making the Witnesses, with their team of lawyers, the “heavy” and recasting the 278 residents of Stratton as the “little people” seeking privacy and protection from frauds and criminals.