By Daniel Baracskay
Other articles in Religious Perspectives and Churches 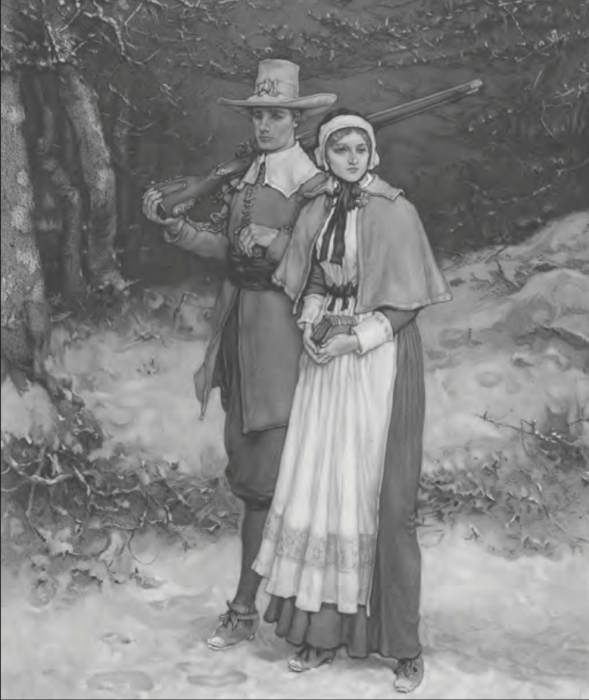 This 1884 engraving by Thomas Gold depicts a Puritan couple walking to church in the snow. The bravery and initiative of the Puritans served as a source of inspiration for colonists during the Revolutionary War. Later, the framers of the Constitution would look to the Puritan era in history for guidance when crafting the First Amendment rights for freedom of religion.

The bravery and initiative of the Puritans served as a source of inspiration for colonists during the Revolutionary War. Later, the framers of the Constitution would look to the Puritan era in history for guidance when crafting the First Amendment rights for freedom of religion.

The term Puritan is commonly applied to a reform movement that strove to purify the practices and structure of the Church of England in the sixteenth through eighteenth centuries. As dissidents, they sought religious freedom and economic opportunities in distant lands. They were religious people with a strong piety and a desire to establish a holy commonwealth of people who would carry out God’s will on earth. In such a commonwealth, they felt, it was the duty of the civil authorities to enforce the laws of religion, thus holding a view almost the opposite of that expressed in the First Amendment.

Puritans tried to purify the established Church of England

The strength of the Roman Catholic Church made religion and government inseparable in portions of Europe during the Middle Ages, but Martin Luther challenged this hegemony in Germany when he nailed his ninety-five theses to a church door in 1517, and the Church eventually split along Catholic and Protestant lines. The English Reformation took shape in 1529 after the pope refused King Henry VIII’s request for a divorce. The king’s anger at the pope led him to split with the Roman Catholic Church and establish the Church of England, or the Anglican Church.

By the mid-sixteenth century, some reformers thought that Protestant denominations had not gone far enough in “purifying” the church and taking it back to its New Testament roots. Puritans were among those intent on purifying the established Church of England.

Puritans had a theocratic society

Many colonists came to America from England to escape religious persecution during the reign of King James I (r. 1603–1625) and of Charles I (r. 1625–1649), James’s son and successor, both of whom were hostile to the Puritans. As the immigrants’ numbers increased, they spread out across what is now Massachusetts and New Hampshire. The Puritans formally established the Massachusetts Bay Company, which operated under royal charter. The continued immigration of colonists to New England served to multiply the number of religious denominations, which led to increased conflict.

The fact that the Puritans had left England to escape religious persecution did not mean that they believed in religious tolerance. Their society was a theocracy that governed every aspect of their lives. Freedom of religion and freedom of speech or of the press were as foreign to the Puritans as to the Church of England. When other colonists arrived with differing beliefs, they were driven out by the Puritans. For instance, the minister Roger Williams, the founder of what became Rhode Island, fled Massachusetts after his proposal to separate church and state met with Puritan hostility.

The framers of the Constitution thought that one way of avoiding the religious intolerance of the Puritan era was to encourage a multiplicity of denominations; the First Amendment specifically prohibits the kind of national religious establishment that had once dominated colonies such as Massachusetts.