By David Schultz
Other articles in Religious Perspectives and Churches 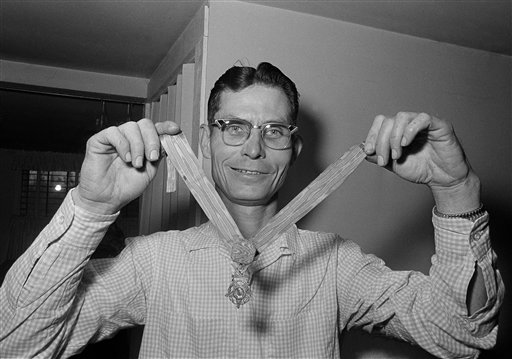 Seventh-day Adventists generally take a strong position on separation of church and state and rights of conscience, such as conscientious objection to military service. The denomination has been at the forefront of First Amendment religious liberty issues. In this photo, Desmond T. Doss, a Seventh Day Adventist and the only conscientious objector to win the Medal of Honor, displays his medal at his home in Georgia in 1966. His story was made into a movie, Hacksaw Ridge. (AP Photo, used with permission from the Associated Press)

Because of its conservative evangelicalism, spiritual commitment to health and dietary practices, management of religious schools, and belief that Saturday is the Sabbath, the Seventh-day Adventist Church and its members have been plaintiffs in many religious liberty cases.

This Protestant denomination has a worldwide membership of some fifteen million, who believe in the imminent second coming of Jesus. It emerged from the millennial speculations of Baptist William Miller in the 1830s. It was officially founded in 1863 by Ellen G. White, among others.

The Seventh-day Adventist denomination is one of the few religious faiths, along with the Church of Jesus Christ of Latter-day Saints (Mormons), originating in the United States.

Perhaps the most famous case involving a Seventh-day Adventist was Sherbert v. Verner (1963).

At issue was the denial of unemployment benefits to Adele Sherbert, who was dismissed from work because of her refusal to work on Saturdays, her Sabbath. Her state, South Carolina, then denied her unemployment compensation, because it believed she did not have a good reason for not working that day.

Eventually, the Supreme Court reversed this decision, holding that the denial of these benefits infringed on Sherbert’s right to the free exercise of religion. The Court issued a similar ruling in Hobbie v. Unemployment Appeals Commission of Florida (1987), another case involving a Seventh-day Adventist.

Sherbert precedent has been at center of many religious liberty cases

Sherbert is a powerful precedent for religious liberty, and so it has been at the center of many free exercise decisions.

For example, in Employment Division, Department of Human Resources of Oregon v. Smith (1990) two members of a Native American religion were dismissed from work and denied unemployment compensation because their religious practice included the ceremonial usage of peyote, a hallucinogenic drug. However, instead of following the Sherbert precedent and its compelling interest standard, the Supreme Court rejected its application and applied a rational basis standard, which eventually led to adoption of the Religious Freedom Restoration Act (RFRA), seeking to reinstate the Sherbert holding.

In City of Boerne v. Flores (1997), the RFRA was declared unconstitutional as applied to state and local governments, and Congress responded by passing in 2003 the Religious Land Use and Institutionalized Persons Act (RLUIPA).

In addition to playing a role in Sherbert and serving as a plaintiff in several other cases, Seventh-day Adventists have filed amicus briefs in other free exercise and establishment clause cases such as Texas Monthly, Inc. v. Bullock (1989) and Zelman v. Simmons-Harris (2002).

In Pacific Union Conference of Seventh-Day Adventists v. Marshall (1977), circuit judge William H. Rehnquist denied a request for summary judgment by Seventh-day Adventists to exempt its employees in approximately 150 religious schools and colleges in California from the equal pay provision of the Fair Labor Standards Act.

Consistent with their Baptist roots, Seventh-day Adventists generally take a strong position on separation of church and state and the rights of conscience. Such views are reflected in Liberty magazine, which the Adventists have published for a hundred years.