By David A. May (Updated in December 2017 by David L. Hudson Jr.)
Other articles in Lawyers 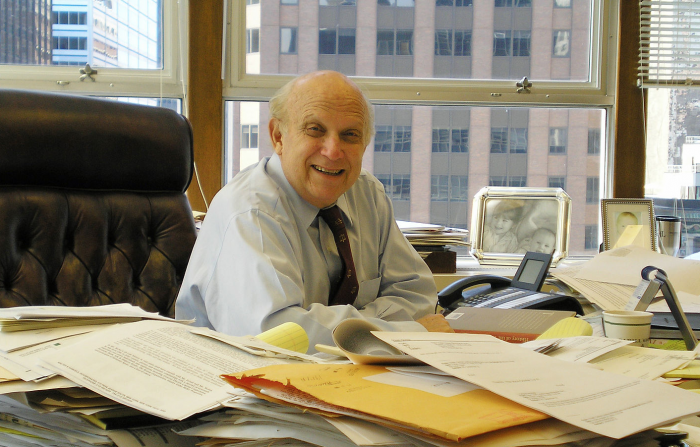 Floyd Abrams (1936– ) is a well-known and widely respected First Amendment lawyer, who currently serves as senior counsel for the law firm Cahill Gordon & Reindell, LLC. Born in Queens, N.Y., Abrams graduated from Cornell University in 1956 and in 1960 from Yale Law School.

Abrams worked from 1961 to 1963 as a legal researcher and clerk for Judge Paul Leahy in the U.S. District Court for the Federal District of Vermont. In 1963 Cahill Gordon Reindel hired Abrams as an associate; he continues to practice for the firm. In addition to his legal practice, Abrams taught as a visiting lecturer at Yale Law School from 1974 to 1980 and 1986 to 1989 and as a visiting lecturer at Columbia Law School from 1981 to 1985.

Abrams catapulted to fame in 1971, when he argued and won on behalf of The New York Times in New York Times Co. v. United States, the landmark case over publication of the Pentagon Papers. The case set a powerful precedent against prior restraint of the press.

Abrams argued his first solo case before the Court in Landmark Communications, Inc. v. Virginia (1978). He then successfully argued Smith v. Daily Mail Publishing Co. (1979). Abrams was also involved in Nebraska Press Association v. Stuart (1976) and argued Branzburg v. Hayes (1972), the only case in which the Court has explicitly considered the question of reporter-source confidentiality.

Abrams involved in other First Amendment cases at the trial level

At the trial level, Abrams acted as counsel in the Heroin Trail case, a 1986 trial involving New York Newsday. Notable among Abrams’s defeats is Wayne Newton v. NBC (9th Cir. 1990), which resulted in a libel judgment against his client, NBC, of more than $22 million dollars, one of the largest libel judgments ever in cases involving the media.

Abrams took on a case for the Brooklyn Museum of Art when it came under attack from New York mayor Rudy Giuliani over the exhibition "Sensation," which the mayor criticized as being sacrilegious.

Abrams was also involved in defending comedian and writer Al Franken in a trademark lawsuit brought by the Fox News Corp. over a Franken book title that used the phrase “fair and balanced,” an expression that Fox had adopted for promotional use.

Along with attorney Kenneth Starr, Abrams participated in McConnell v. Federal Election Commission (2003), a case stemming from the so-called McCain-Feingold legislation regulating campaign financing; this is another notable case in which Abrams did not prevail. He also defended former New York Times reporter Judith Miller during her legal difficulties resulting from her refusal to reveal sources in the episode involving the outing of Valerie Plame as a covert CIA agent.

Abrams is the recipient of many legal awards, including the 2015 Walker Cronkite Freedom of Information Award, the 2015 Yale Law School’s Award of Merit, and the American Lawyer Lifetime Achievement Award in 2013.

This article was originally published in 2009 and updated in 2017. David A. May, PhD, is the interim president of Eastern Washington University. He taught at EWU from 1999-2016 on topics such as Supreme Court politics and public policy, jurisprudence, and judicial process.