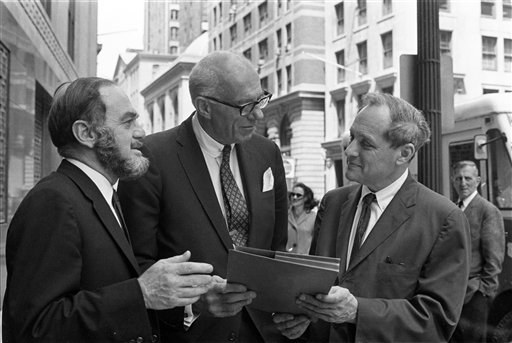 Victor Rabinowitz (1911–2007), a civil liberties attorney known for his passionate defense of individual liberties, participated in numerous high-profile First Amendment cases throughout his legal career. In this May 22, 1968 file picture, Dr. Benjamin Spock, center, talks with his lawyers, Victor Rabinowitz, left, and Leonard B. Boudin, right, outside Federal Court in Boston during the noon recess of his trial on charges of conspiring to counsel young men to evade the draft. (AP Photo, used with permission from the Associated Press)

Victor Rabinowitz (1911–2007), a civil liberties attorney known for his passionate defense of individual liberties, participated in numerous high-profile First Amendment cases throughout his legal career. He was one of the founders of the National Lawyers Guild, in 1937, and was active in the civil rights movement. His memoir, Unrepentant Leftist (1996), describes his political and professional life over six decades.

Born in Brooklyn, New York, Rabinowitz grew up in a wealthy socialist family. After earning undergraduate and law degrees from the University of Michigan, he entered private practice in 1938 with Louis B. Boudin, a well-known labor lawyer. Six years later Rabinowitz formed his own law firm and was later joined by Boudin’s nephew, Leonard. Rabinowitz and Leonard Boudin became two of the most recognizable and prolific civil liberties attorneys in the country.

Rabinowitz argued before the Supreme Court in American Communications Association v. Douds (1950), contending that a provision of the Labor Management Relations Act requiring labor unions to assert that they were not members of the Communist Party was unconstitutional. In Lamont v. Postmaster General (1965), he participated in the successful challenge to a federal law allowing the censorship of Communist materials sent through the postal system. In a 6-3 decision, the Court upheld the provision.

In Bond v. Floyd (1966), Rabinowitz was one of the lawyers who represented Julian Bond in a First Amendment challenge to the Georgia legislature. The legislature had voted not to seat Bond, an African American who had been elected to the legislature, for making statements opposed to the Vietnam War. The Court ruled, 9-0, that Bond had been denied freedom of speech and must be allowed to take his seat. Rabinowitz also filed an amicus brief on behalf of the National Emergency Civil Liberties Committee in the famous Pentagon Papers decision, New York Times Co. v. United States (1971).