Gerende v. Board of Supervisors of Elections of Baltimore (1951) 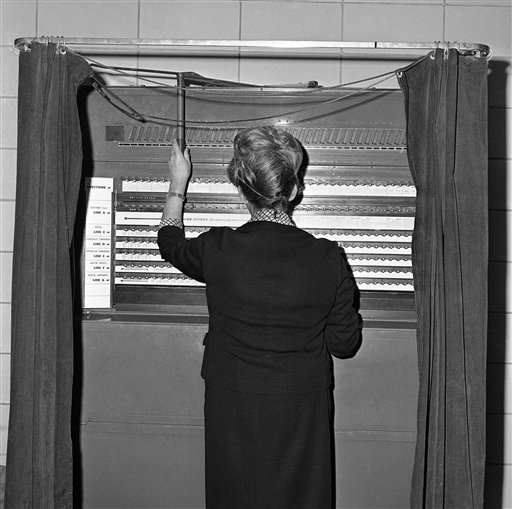 A voter casts her ballot at a voting machine in Baltimore, Maryland on December 8, 1964. In 1951, the Supreme Court in Gerende v. Board of Supervisors of Elections of Baltimore upheld a maryland requirement that all candidates seeking to be on the ballot must file loyalty oaths. (AP Photo/William Smith, used with permission from the Associated Press.)

The Supreme Court’s brief per curiam opinion in Gerende v. Board of Supervisors of Elections of Baltimore, 341 U.S. 56 (1951), upheld a Maryland requirement that all candidates seeking access to the ballot must file affidavits attesting that they were neither engaged in overthrowing the state or national government nor were knowing members of any organization committed to such efforts.

The Court accepted the loyalty oath against apparent overbreadth or vagueness challenges with the understanding, affirmed by the Maryland attorney general, that the oath only limited attempts to “overthrow the government by force or violence.” Justice Stanley F. Reed concurred in the result without a written opinion. Despite this precedent, Justice William O. Douglas wrote a decision for the Court in Whitehill v. Elkins (1967) overturning a similar oath for university employees in Maryland on the ground that it was unconstitutionally vague when read in conjunction with other provisions of state law.