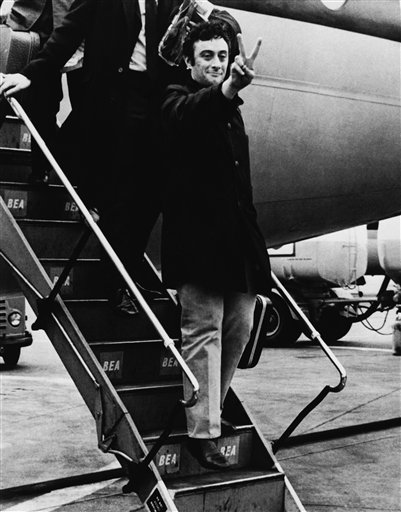 Stand-up comedian Lenny Bruce (1925–1966), a forerunner of comedians and shock jocks, was arrested numerous times in the 1950s and 1960s due to the alleged obscene content of his nightclub routines. Through his legal struggles, Bruce brought his craft more First Amendment protection and inspired other comedians to challenge social mores and boundaries. In this photo, Bruce gives the victory sign to reporters in April 1963. (AP Photo, used with permission of the Associated Press)

Stand-up comedian Lenny Bruce (1925–1966), a forerunner of comedians and shock jocks such as Richard Pryor, George Carlin, and Howard Stern, was arrested numerous times in the 1950s and 1960s due to the alleged obscene content of his nightclub routines. Through his legal struggles, Bruce brought his craft more First Amendment protection and inspired other comedians to challenge social mores and boundaries.

Born in Mineola, New York, in 1925 as Leonard Alfred Schneider, Lenny Bruce had a troubled early life. His parents divorced when he was five, and he moved around to live with many different relatives. In 1942 he joined the Navy and served until his discharge in 1946. The next year, he changed his name and performed his first comedy routine, as a mimic in a Brooklyn nightclub. He was arrested in Miami, Florida, in 1951 for impersonating a priest and soliciting funds for a leper colony; although he was not convicted, he admitted later that only a third of the thousands of dollars he collected went to the colony.

Early in his career, Bruce wrote screenplays. He also released four albums of his comedy material on the Fantasy Records label, covering wide-ranging topics such as discrimination, abortion, and religion. He eventually appeared on television on the Steve Allen Show and other programs. Yet as his fame grew, so did the edge to his comedy and social commentary, which led to his legal troubles.

Bruce was arrested at the Jazz Workshop in San Francisco in 1961 for using sexually explicit language. Although he was acquitted, law enforcement agencies put him under greater scrutiny, resulting in drug arrests in Philadelphia and Los Angeles.

In a December 4, 1962, performance at the Gates of Horn club in Chicago, Bruce was arrested for and eventually convicted of violating a state obscenity statute. On appeal, he was defended by distinguished First Amendment scholar and law professor Harry Kalven Jr.

In a landmark decision on artistic freedom, the Illinois Supreme Court in People v. Bruce (Ill. 1964) ruled that Bruce’s comedy routine was social commentary and not obscenity.

In 1963 Manhattan district attorney Frank Hogan, who was working with Francis Cardinal Spellman, the Archbishop of New York, began to investigate Bruce. Undercover police detectives attended his two 1964 appearances at Cafe Au Go Go in Greenwich Village, and they arrested him on obscenity charges after each show. His trial attracted media attention, and artists including Woody Allen and Norman Mailer testified on his behalf. A three-judge panel convicted him of obscenity and sentenced him to serve four months.

After Bruce’s conviction, nightclubs across the country blacklisted him for fear they would face obscenity charges. While he was free on parole during his appeal, Bruce died of a drug overdose in 1966 at age 40. The New York Court of Appeals later overturned his conviction in 1970.

Dustin Hoffman portrayed Bruce in Lenny, a 1974 film that depicted the comedian’s personal and legal troubles.

Bruce was posthumously pardoned to 'uphold' the First Amendment