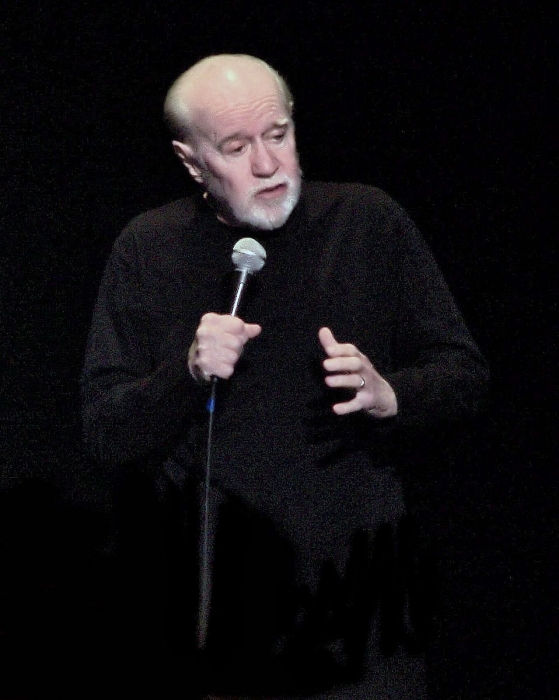 Born in New York City, Carlin had established himself as a highly successful mainstream comedian by the early 1960s. After growing disillusioned with entertaining what he called “middle-class morons,” however, he transformed himself into a rebel and his inoffensive comedy into biting social and political satire. Carlin emerged as a leading counterculture performer in the early 1970s.

In October 1973, a New York City radio station aired a 12-minute recording of a Carlin monologue entitled “Filthy Words,” a sequel to an earlier routine called “Seven Words You Can Never Say on Television” (popularly known as “Seven Dirty Words”). Carlin used these scatological and sexual terms in various forms throughout the performance to satirize a puritanical streak in American culture and to question what made those particular words so objectionable. The piece aired around 2:00 in the afternoon and was heard by John Douglas, a member of Morality in Media, and his young son while in their car.

The father filed a complaint with the Federal Communications Commission (FCC), which ruled that although the broadcast was not necessarily “obscene,” it was “indecent” and “patently offensive” and therefore violated federal law. The station battled the finding all the way to the Supreme Court, which decided that the FCC had the power to regulate radio broadcasts considered indecent but not obscene.

The controversy fueled Carlin’s already flourishing career. He continued to use his comedy to address volatile topics, including censorship, religion, politics, illegal drugs, foreign policy, and the American consumer culture.

He hosted the first episode of Saturday Night Live in 1975, worked as a substitute host on The Tonight Show, and made a series of one-hour specials for cable’s Home Box Office. In addition, Carlin played roles in numerous movies, including Bill and Ted’s Excellent Adventure and The Prince of Tides, and wrote several best-selling books, among them Brain Droppings (1997), Napalm and Silly Putty (2001), and When Will Jesus Bring the Pork Chops? (2004). He released some 20 concert albums.

This article was originally published in 2009. Mark Byrnes is Provost and Professor of Political Science at MTSU. He has taught and written on a range of topics related to American government, including a course on politics and film.