By John R. Vile
Other articles in Publishers or Subjects of Attempted Censorship 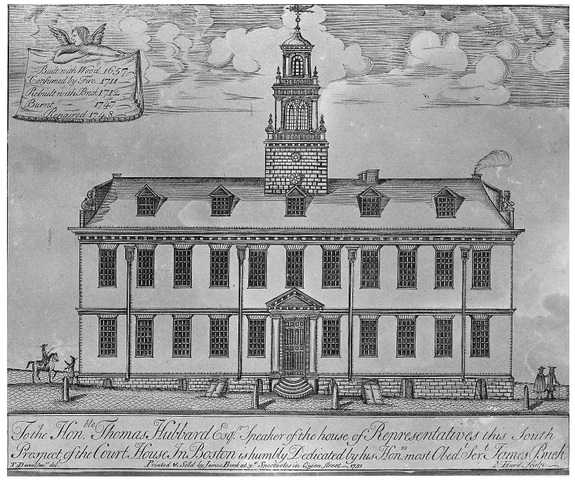 Daniel Fowle (1715–1787), a printer, played an important part in highlighting freedom of the press in the Colonial period prior to adoption of the First Amendment. Fowle was arrested for satrizing members of the Massachusetts Colonial legislature. The original building of the legislature is pictured here. (Image via Wikimedia Commons, created by Nathaniel Hurd in 1751, public domain)

Daniel Fowle (1715–1787), a printer, played an important part in highlighting freedom of the press in the Colonial period prior to adoption of the First Amendment.

Fowle was arrested at his home in 1754 on suspicion of having published a pamphlet, The Monster of Monsters, which he admitted to selling, and which satirized members of the Colonial legislature for taxing rum.

Unbowed by his five-day imprisonment, Fowle subsequently recounted his ordeal in another pamphlet, A Total Eclipse of Liberty, and then fled to Hampshire, where he founded the New Hampshire Gazette.

Meanwhile, Fowle lost a suit against the Massachusetts government for his imprisonment. After he was sued by the state for court costs, the Massachusetts General Court overturned the costs and ordered that the colony pay damages for his suffering.

At a time when the English and American Colonists were likely to equate representative assemblies with the people, Fowle’s experience indicates that the identity was not complete.

If the press was to be free, its members would have to be able to criticize the legislature. Fowle set an example that other publishers followed in their denunciations of the Stamp Act and other British taxes.