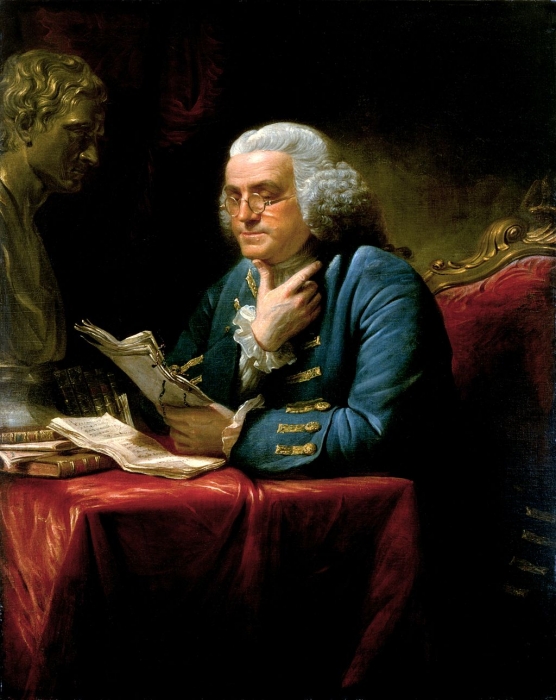 Benjamin Franklin (1706–1790), printer, inventor, scientist, and statesman, occupies a distinguished place in U.S. history. He not only played an influential role in the Revolutionary War era and the fight for American independence, but also helped to shape the U.S. Constitution and vision for the new nation. He was a lifetime champion of First Amendment freedoms, particularly freedom of the press.

Franklin became a printer and publisher of a newspaper

Franklin was born in Boston, Massachusetts, to Josiah Franklin and Abiah Folger. He attended Boston Latin School, but did not graduate. His keen intellect grew through his intensive studying and reading. Franklin was apprenticed at an early age to his older brother James, who published the first independent newspaper in the Colonies, the New England Courant.

His apprenticeship ended abruptly at the age of 17 when he moved to Philadelphia. Franklin’s knowledge of the printing business grew, and he bought and became the publisher of the Pennsylvania Gazette. He used the newspaper as a forum for political discourse in the city.

Franklin’s professional interests were diverse. In 1731 he was one of several young men who began the first public library, located in Philadelphia. A prolific writer, he became known for Poor Richard’s Almanack (1733) and Father Abraham’s Sermon (1758). In 1743 he founded the American Philosophical Society.

The source of many inventions, Franklin was best known for his famous kite-flying experiment that he conducted during a lightning storm. In the early 1740s, he developed a vision for the Academy and College of Philadelphia, which opened in 1755 and later merged with the University of the State of Pennsylvania to become the University of Pennsylvania.

Franklin was involved in the early American struggle

Franklin became involved in politics in the 1740s and 1750s. In addition to numerous political appointments, Franklin displayed his diplomatic brilliance when he was sent to Europe to advance colonial relations with Great Britain and France. After a five-year stay in London, he returned to the Colonies in 1762 and developed a proposal for managing colonial relations with the Indians. The Colonies then sent him back to Great Britain to protest the contentious Stamp Act of 1765 and Townshend Act of 1767.

The Declaration of Independence, signed on July 4, 1776, was written primarily by Virginian Thomas Jefferson, with assistance from both Franklin and John Adams. Later, in the fight for American independence, Franklin was instrumental in securing financial aid and military backing from the French to help defeat the British.

After Lord Cornwallis surrendered on behalf of the British army at Yorktown on October 17, 1781, Franklin, John Adams, and John Jay were sent to Europe to negotiate on behalf of the new nation. Franklin succeeded in pacifying all parties enough to sign the Treaty of Paris in 1783, which formally recognized America’s new status.

At the age of 81, Franklin was the oldest delegate to attend the Constitutional Convention of 1787. His was a conciliatory voice that was at least in part responsible for hammering out the landmark “Great Compromise,” which solidified elements of both the Virginia and New Jersey Plans by granting representation on the basis of population (sought by the large states) in the House of Representation and equal representation (advocated by the small states) in the Senate. Franklin also gave an influential speech at the end of the Convention, later republished during the ratification debates, urging delegates to accept the document as the best that a collective body was likely able to craft.

Franklin’s reputation as a champion of U.S. independence and as a statesman is paralleled only by that of George Washington. In addition to championing freedom of the press (Franklin was the first to publish Cato’s “Essay on Free Speech” in 1722 after his brother was imprisoned for criticizing the Massachusetts government), Franklin vigorously supported the rights of religious freedom, speech, and assembly that were ultimately incorporated into the First Amendment.

Franklin viewed the flow of ideas through such freedoms as essential to democracy, and he practiced these rights through numerous literary endeavors and ownership of the Pennsylvania Gazette. Franklin viewed free expression as the principal antagonist of tyrannical regimes. He also defended religious toleration and freedom. He vested authority in the actions of man rather than in an absolute religious doctrine.

Franklin eventually became a staunch abolitionist in the fight to free slaves. He was the oldest signer of both the Declaration of Independence and the U.S. Constitution, bringing not only seasoned intellect to the creation of these documents, but also insight and patriotism.