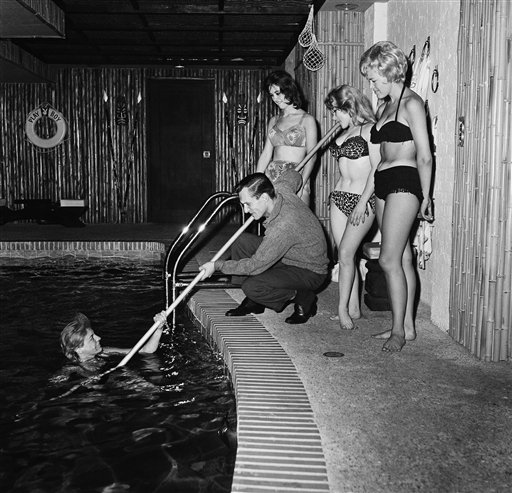 Playing at having fun, Hugh Hefner, center, rescues one of the swimmers in the indoor pool of his $400,000 apartment in Chicago in 1961. Hefner's Playboy magazine was thought to be obscene by some, and Hefner became an advocate of First Amendment rights. (AP Photo/ Edward Kitch, used with permission from the Associated Press)

Hugh Marston Hefner (1926–2017), the founder of Playboy magazine, was a prominent advocate of First Amendment rights. Hefner’s interest in the subject originated when his magazine published material that some law-enforcement agencies considered obscene.

Born in Chicago, Hefner earned a BA in psychology from the University of Illinois and studied for a semester at Northwestern University. He founded Playboy in 1953 and later expanded the publication into a cultural empire, by producing Playboy-related television programs, films, clothing, clubs and casinos, and online content.

The magazine, which featured photographs of nude women and, in its earlier days, articles by significant literary figures of the period, became popular in the 1950s, selling more than a million copies per month. In 1963 Hefner was arrested for selling obscene literature. A jury was unable to reach a verdict.

Changes in the public’s attitude toward sex in the 1960s challenged the magazine’s approach to sexual freedom by suggesting that female sexuality deserved as much respect as did male sexuality. Critics of Playboy argued that women dressed in bunny costumes — a Playboy trademark — existed only for the pleasure of men. Hefner fought back by writing a series of editorials entitled “The Playboy Philosophy” that championed his interest in individual freedom and suggested the country was repressed by a Puritan heritage.

After two decades of reduced success, the magazine was rejuvenated when Hefner received several awards, including the Henry Johnson Fisher Award in 2002 from the Magazine Publishers of America. Hefner was inducted into the Hall of Fame of the American Society of Magazine Editors in 1998 and occasionally served as guest lecturer for a course he endowed at the University of Southern California, entitled Censorship in Cinema.

In 1979 Playboy Enterprises, Inc., established the Hugh M. Hefner First Amendment Awards, for noteworthy contributions to enhance and protect First Amendment rights. Although he was still a major shareholder in the enterprise, Hefner promoted his daughter, Christie, to head Playboy in 1988.

Hefner died at the age of 91 on September 27, 2017 at his home, the Playboy Mansion, in the Holmby Hills area of Los Angeles. His death was announced by Playboy Enterprises.

This article first published in 2009 and has been updated. The primary contributors were Veronica Hefner, a Professor at St. Mary's College of California, and Jurij Toplak, a Professor of Law at the University of Maribor, Slovenia. It has been updated by the First Amendment Encyclopedia.