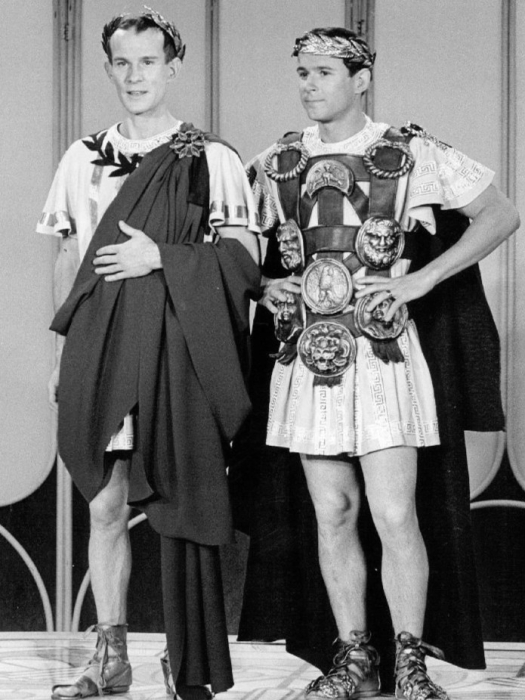 The Smothers Brothers Comedy Hour, one of the most controversial shows in television history, was broadcast on CBS television from 1967 to 1969.

Known for its anti-establishment and pro-drug culture humor, the show lampooned middle-America values, the military, the police, the religious right, and the government. Although by today’s standards the program was fairly moderate, in the social and cultural turmoil of the 1960s CBS’s executives argued that the program violated the network’s obligation, as an “invited guest” in viewers’ homes, to preserve “good taste” in programming.

CBS’s self-censorship was not a result of government action; so it did not directly involve First Amendment protection of free expression. But the network’s reaction showed how concerns about offending popular mores can lead to self-censorship.

By late 1968 network censors regularly prescreened and edited the show’s material. Cast members and guest stars who performed — or those whose reputations indicated that they might perform — were either censored in part or deleted.

As CBS tried to tighten its control, the show pushed harder at the boundaries of free speech, and the brothers aired their opposition in the press. The press was eager to provide a forum for the debate, while declaring its own position for free speech in all media — First Amendment protections had never been applied to television.

Although CBS renewed the show’s contract for the next season, Tom Smothers lobbied the Federal Communications Commission (FCC) and members of Congress to intervene against corporate censorship and infringement of free speech rights.

But the FCC asserted that broadcasters had the responsibility to operate in the public interest and to determine what that might be. CBS maintained that free speech issues applied only to news programming, not to entertainment, which should not present political views.

In 1969, under the pretext of an unrelated contractual violation, CBS abruptly canceled the Comedy Hour. The Smothers responded by filing a breach of contract lawsuit, in which CBS lost and ultimately had to pay.