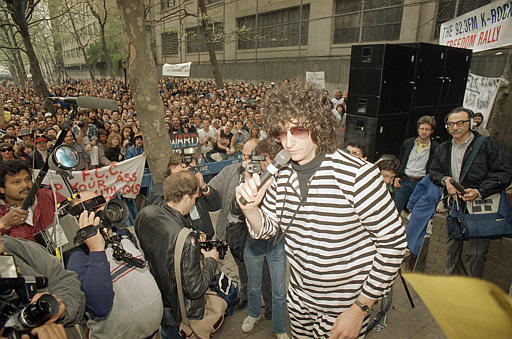 Radio shock jock Howard Stern, right, speaks at a rally in New York's Dag Hammerskjold Plaza in 1987, where more than 2,000 people showed their support after the FCC censured Stern's off-color broadcasts. The rally was broadcast live on two radio stations, WXRK-FM in New York and WYSP-FM in Philadelphia. Stern has consistently pushed the boundaries of First Amendment free expression rights on the public airwaves. (AP Photo/Richard Drew, used with permission from the Associated Press)

Howard Stern (1954– ), one of the highest paid and most controversial radio personalities in the United States, has consistently pushed the boundaries of good taste and First Amendment free expression rights on the public airwaves. He has had ongoing battles with the Federal Communications Commission (FCC), which regulates broadcasting, and has received more fines from the FCC than any other radio personality.

Radio DJ Stern has a reputation as a "shock jock"

Born in Queens, New York, Stern began his radio career at WTBU, the student station at Boston University, where he earned a BA in 1976. He then worked at stations in New York, Detroit, Connecticut, and Washington, D.C., rapidly developing a reputation as a “shock jock,” a DJ who uses sexual and scatological innuendo to appeal to a mass audience.

Stern has been fined, censured, suspended after inappropriate comments

Throughout his career Stern has been criticized for comments that have been deemed to be racist or otherwise inappropriate. In 1985 he and his staff were fired from NewYork City’s WNBC after they aired a skit entitled “Bestiality Dial-A-Date.” In the early 1990s the FCC imposed a fine of $600,000 on Infinity Broadcasting, which then carried Stern’s program, after Stern aired a discussion involving Aunt Jemima and masturbation. Some of his comments after the Columbine High School massacre in Colorado in 1999 brought an official censure from the Colorado state legislature. In 2004 Clear Channel Communications “indefinitely suspended” Stern in six radio markets after he aired a sexual and racist dialogue.

When the FCC cracked down on what it considered indecency in the media after Janet Jackson’s Super Bowl “wardrobe malfunction,” Stern was one of its earliest targets. In April 2004 the FCC fined Clear Channel $500,000; after this the corporation said it would permanently terminate its dealings with Stern. In July, however, he returned to four of the six markets from which he had been suspended earlier that year.

Stern is beyond reach of FCC regulations on satellite radio

In January 2006 Stern began to broadcast exclusively on Sirius Satellite Radio under a five-year contract. With the change from terrestrial radio to the unregulated satellite broadcast stations, Stern was beyond the reach of the FCC’s regulations and its increased fines.