By Daniel Baracskay (updated February 2018 by John R. Vile)
Other articles in Documents 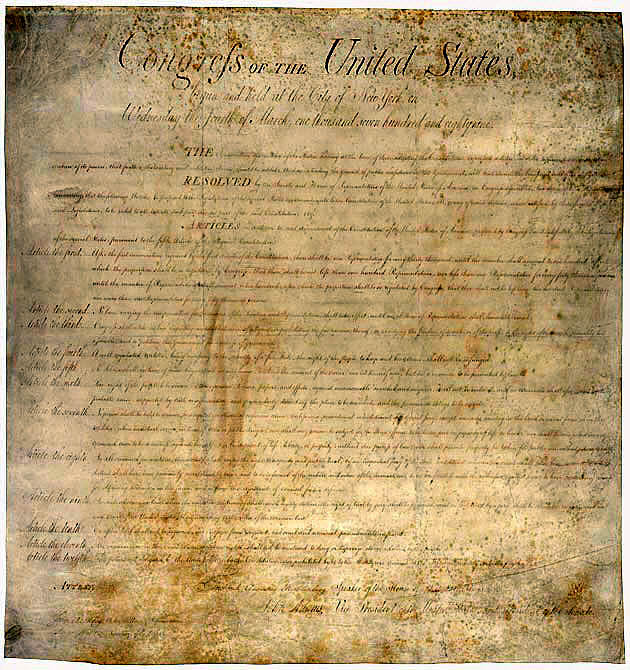 The Bill of Rights consists of the first 10 amendments to the U.S. Constitution.

In response to the weaknesses of the Articles of Confederation, which guided the fledging nation from 1781 to 1798, the country’s leaders convened a convention in Philadelphia in the summer of 1787 to amend the Articles, but delegates to the Convention thought such a step would be inadequate and took the more radical one of proposing a new document. From the Virginia and New Jersey Plans, a “Great (Connecticut) Compromise” was reached that resolved some of the factional disputes between the large and small states. The Convention also adopted scores of other compromises in forming each of the three branches of the national government and the relationship between this government and the states.

Bill of Rights was added to Constitution to ensure ratification

When the Convention reported the Constitution to the states for ratification, the nation split between Federalist supporters of the new document and Anti-Federalist opponents, who were especially concerned that it did not, like most state counterparts, have a bill of rights (of the 11 state constitutions in place in the years after independence, 7 had bills of rights). To ensure ratification of the document, the Federalists offered concessions, and the First Congress proposed a Bill of Rights as protection for those fearful of a strong national government. The Bill of Rights came into effect in December 1791, after ratification by three-fourths of the state legislatures.

The level of support for the new Constitution varied. During the debate over its ratification, the Federalists grounded their support for the document in the shortcomings of the Articles of Confederation. In late October 1787, the first in a series of 85 essays appeared in print bearing the pen name Publius. These essays, which became known as the Federalist Papers, were written by James Madison, Alexander Hamilton, and John Jay. They presented a succinct series of arguments that, even today, are revered in the annals of political theory. The essays addressed the manner in which the new republican government, based on federalism and separation of powers, would guard against the tyranny of interest groups and other threats.

However, the Anti-Federalists were not convinced that these safeguards were adequate. Led by George Mason, Patrick Henry, and Elbridge Gerry, the Anti-Federalists wrote their own essays, basing their arguments on the tyranny of the British monarchy so resented by the 13 original colonies. This faction sought additional protections that would guard against an overly centralized and oppressive national government.

Ratification was a long process

Ratification of the U.S. Constitution was a slow and arduous process. Although the approval of only nine states was needed to ensure the document’s ratification (Article VII), ultimately the support of all 13 states was secured. Thus from the ashes of the Articles of Confederation emerged a federal system with enduring features such as republicanism, separated institutional powers, and a system of checks and balances. The Constitution set forth the institutional structures, players, processes, and procedures for governing the new nation through a series of seven articles.

Despite the seemingly apparent victory achieved in ratifying the Constitution, the founders failed to resolve the continuing debate over limiting the powers of the national government. As Alexander Hamilton remarked in Federalist No. 84, “the most considerable of the remaining objections is, that the plan of the convention contains no bill of rights.” To ease the process toward ratification, supporters such as Revolutionary War hero George Washington had suggested creating a series of guarantees that would ultimately prevent the national government from tampering with certain rights and liberties deemed essential to a democratic form of government.

James Madison, who appears to have been influenced on the subject by Thomas Jefferson, took the lead in the First Congress in composing the Bill of Rights. Although the list of rights and liberties suggested by the former colonies was extensive, Madison narrowed it to 12 amendments, known as the Bill of Rights. Ten of these amendments became part of the U.S. Constitution in 1791 after securing the approval of the required three-fourths of the states.

The Bill of Rights resolved one of the most glaring deficiencies of the new Constitution — preventing the government’s abuse of individual liberties.

The First Amendment, one of the more symbolic and litigious of the amendments, guarantees fundamental rights such as freedom of religion, speech, and the press, and the rights to assemble peacefully and to petition the government. The free exercise clause in the First Amendment prohibits the government from restricting religious beliefs and practices, although exceptions have been made in situations in which ceremonial practices threaten an individual’s safety or welfare. The establishment clause of the First Amendment has been interpreted as calling for separation of church and state.

This separation has been observed through various legal precedents and U.S. Supreme Court interpretations of the “wall of separation doctrine,” which states that government laws may not have as their purpose an intent to aid religion. This doctrine has been further reinforced through a three-part Lemon test, named for the 1971 Supreme Court decision Lemon v. Kurtzman. The Lemon test requires that laws have a secular purpose, that their primary effect neither advances nor inhibits religion, and that they do not foster “excessive government entanglement with religion.”

The First Amendment also addresses freedom of expression. The free expression clause guarantees the rights of individuals and the press to speak freely about issues, even those deemed controversial. Freedom of speech has generated substantial debate and legal controversy. However, the clear and present danger test developed by Justice Oliver Wendell Holmes Jr. in the 1919 Supreme Court decision Schenck v. United States provides the means for deciding whether a particular speech is protected by the First Amendment.

Under this test, the Court has upheld speech that advocates ideas or arguments, but has declared speech that incites violence or creates a “clear and present danger” to society to be unconstitutional. Nor are “fighting words” protected by the First Amendment, because they inflict injury or incite violence. The press is also protected by the doctrine of no prior restraint, which has developed out of the First Amendment. Under this doctrine, government restrictions and the licensing of media content prior to publication are unconstitutional.

The Second Amendment provides for the maintenance of state militias, and it guarantees the right of citizens to “bear arms.” This amendment was considered important because in the Revolutionary War citizens had to protect themselves from tyranny and threats to their safety and that of the nation.

The Third Amendment also has its roots in the Revolutionary War era. It protects personal privacy by preventing the quartering of soldiers in a private home without the owner’s consent in peacetime, or according to the prescribed law in times of war.

The Fourth Amendment prevents “unreasonable searches and seizures,” and requires authorities to show probable cause to obtain warrants to search and seize dwellings and property.

The Fifth Amendment also deals with personal rights and certain guarantees against the unconstitutional treatment of accused persons. It requires a grand jury indictment for serious crimes, prohibits repeated prosecution for the same offense (double jeopardy), and prevents the government from taking life, liberty, or property without due process of the law. The well-known saying “taking the Fifth” is derived from the provision that no persons shall be compelled in any criminal case to testify against themselves — that is, submit to self-incrimination. This amendment also addresses the concept of “eminent domain” — that is, the owner of private property seized for public use must receive just compensation for that property.

The Sixth Amendment sets forth additional guarantees for accused persons: the right to be informed of an accusation, the right to have a speedy and public trial, the right to confront witnesses, and the right to legal counsel for defense.

The Seventh Amendment guarantees the right to a jury in civil cases in which the “value in controversy” exceeds $20.

Also related to trials, the Eighth Amendment prohibits excessive bails and fines and “cruel and unusual punishment” for those found guilty of a crime.

The Ninth and Tenth Amendments

The Ninth Amendment protects rights not specified in the Constitution, and the Tenth Amendment reserves for the states or citizens all other powers not delegated to the national government or denied to the states.

Despite their ratification as formal amendments to the U.S. Constitution, the amendments of the Bill of Rights were initially applied only to the powers of the federal government and not those of the states. This limited application was reaffirmed in the 1833 Supreme Court decision Barron v. Baltimore. That situation changed, however, after ratification of the Fourteenth Amendment on July 9, 1868, after the Civil War. It declared that no state shall “deprive any person of life, liberty, or property, without due process of law,” and provided the basis for the argument that the rights in the first 10 amendments now applied to the states.

But even then, only selective incorporation, or the application of certain but not all portions of the Bill of Rights, occurred until a series of Court decisions — among them, Gitlow v. New York (1925), incorporating freedom of speech, and Palko v. Connecticut (1937), which failed to incorporate the Fifth Amendment provision against double jeopardy because the Court did not, at that time, consider that right to be fundamental.

A recent book by Gerard N. Magliocca has demonstrated that, in part because the first 10 amendments did not follow the traditional form of previous bills or declarations of rights, it was not common to characterize the first 10 amendments as the “bill of rights” until after the Spanish-American War in 1898.  At that time, American leaders promised that these rights (or at least some of them) would protect residents in the new foreign colonies that the nation had acquired.

Just as Federalists had used the bill of rights to assure state ratification of the Constitution in an earlier era, so too, modern American leaders subsequently used the protections to allay fears about increasing federal powers, such as those that Congress assumed during the New Deal, and to contrast American values with those of the totalitarian powers against which the nation was arrayed in World War II and the Cold War.

This list of guarantees has provided protections against the arbitrary and tyrannical treatment of citizens by their government, and has been understood to include a right to privacy. Many decisions by the Supreme Court have reinforced the protection of these liberties and further extended the application of the first Amendment and other provisions within the Bill of Rights to state and local governments.

This article was originally published in 2009 and updated in 2018. Daniel Baracskay teaches in the public administration program at Valdosta State University.