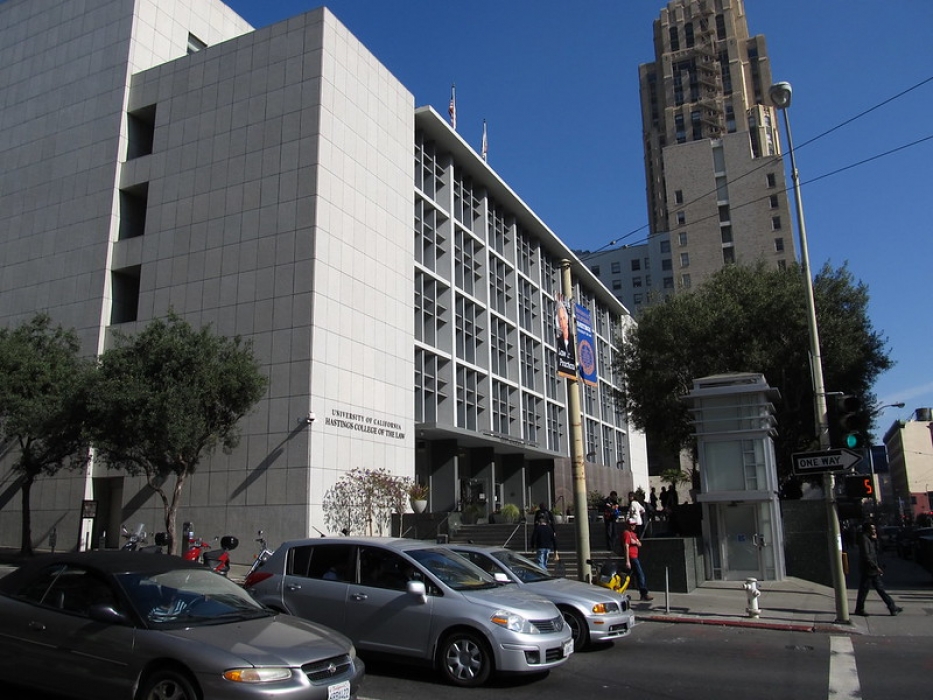 The 5-4 decision by the U.S. Supreme Court in Christian Legal Society v. Martinez (2010), upheld lower court decisions that allowed the law school at the University of California at Hastings to deny recognizing a chapter of the Christian Legal Society (CLS) as a “Registered Student Organization” (RSO). (Image of University of California, Hastings College of the Law, San Francisco via Ken Lund on Flickr, CC BY-SA 2.0)

Such registration would make the chapter eligible for financial assistance collected through mandatory fees, use of facilities, and use of the University logo.

Chapter did not comply with law school's nondiscrimination policy

In addition to requiring that such organizations be “non-commercial” and restricted to students, the university also required compliance with a nondiscrimination policy that covered religion and sexual orientation and required that both membership and leadership positions be open to all.

The Christian Legal Society sought exemption on the basis that it had a statement of faith that included restricting sex to marriage between a man and a woman. The University refused to provide the exemption.

The majority decision, written by Justice Ruth Bader Ginsburg, focused on a stipulation stating that the University had applied this standard to all groups.  Ginsburg suggested that this was an appropriate situation to apply the Court’s limited public forum precedents.

She thought such analysis applied to both the Christian Legal Society’s asserted associational and speech rights.  Moreover, she observed that past cases had “distinguished between policies that require action and those that withhold benefits.”  As she explained, the University “is dangling the carrot of subsidy, not wielding the stick of prohibition.”

She further argued that First Amendment rights must be examined in light of the school environment, which required a degree of deference to university decisions. Ginsburg defended what she described as Hasting’s “all-comers requirement” by citing its goals of providing educational opportunities to all students, promoting its nondiscrimination policy, encouraging tolerance, and following state law. She further noted that the law school continued to allow the Christian Legal Society access to its buildings.

Ginsburg distinguished the “permissibility” of Hastings’s policy from its “advisability.”  Although acknowledging that the policy had a disparate impact, she thought that it was “nominally neutral.” She did not think that Hasting’s policy was pre-textual but suggested that the Ninth Circuit Court might on remand consider whether policies had been selectively enforced.

In a concurring opinion, Justice John Paul Stevens reiterated that he thought Hasting’s policy was “viewpoint neutral,” and that it did not constitute “viewpoint discrimination.” Justice Anthony Kennedy penned a similar concurrence.

Alito asserted that the decision represented an attempt to enforce “political correctness” and noted that the Christian Legal Society was the only group excluded under the University’s policy. Much of Alito’s decision focused on questioning the genuineness of Hasting’s “all-comers policy,” which he said had been intermittently argued, variously presented and interpreted, and selectively enforced.

He further pointed to evidence suggesting that the University did not effectively allow the Christian Legal Society to use its facilities, often refusing to respond to such requests until after scheduled events had transpired.

Alito believed the majority decision departed significantly from the decision in Healy v. James, which was much more sympathetic to rights of group association.

He did not believe that Hastings had offered sufficient justification to deny registration to the Christian Legal Society, but that it had effectively engaged in viewpoint discrimination.  He argued that “[o]nly religious groups were required to admit students who did not share their views” and suggested that a Free Love Club would not have been required to admit individuals with traditional views of sexuality.

Under such circumstances, Alito did not think it was appropriate for the Court to defer to state authorities but to exercise its own independent judgment.  He thought the shifting nature of the university’s policies, their timing, the lack of documentation for the continuity of its policies, and what he considered to be selective enforcement policies, demonstrated that it was using facially neutral criteria as a pretext to discriminate against a religious group.

He stated that “today’s decision is a serious setback for freedom of expression in this country.”