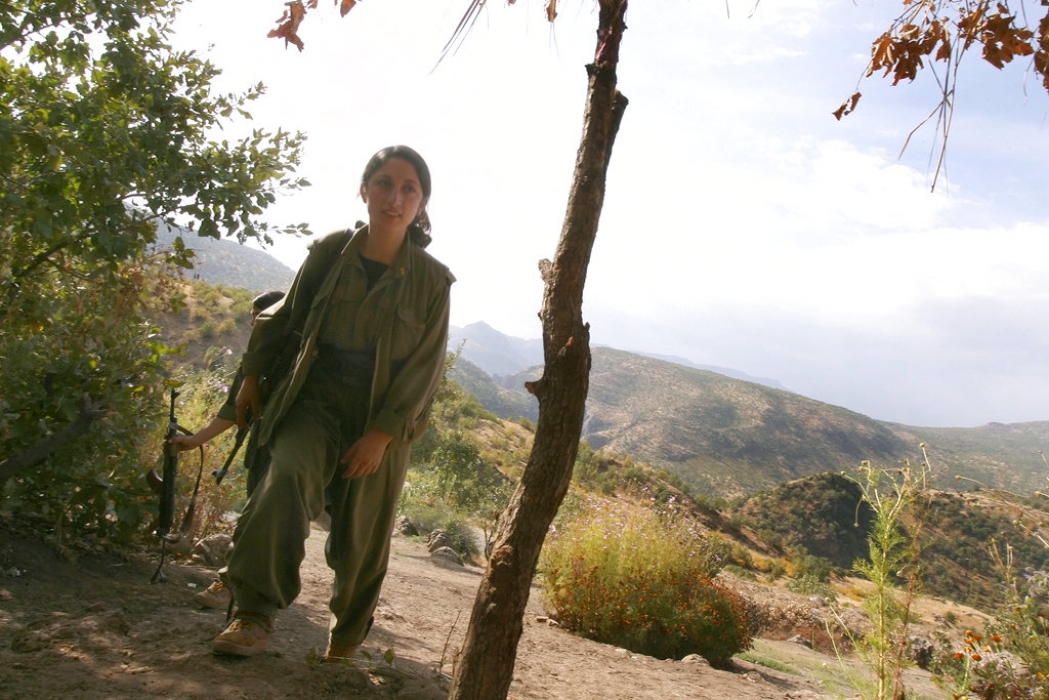 The Humanitarian Law Project, which provided aid to Kurdistan Workers' Party, unsuccessfully challenged a federal law that prohibited assistance to groups designated as foreign terrorists organizations. The Supreme Court rejected that the law violated the First Amendment rights of free speech and freedom of association, and ruled that the government had a compelling interest of the highest order in protecting national security. In this Oct. 26, 2007 file photo, a member of the Kurdistan Workers' Party, known by its Kurdish acronym PKK, is seen near the Iraqi-Turkish border, northern Iraq. (AP Photo/Khalid Mohammed, File)

In Holder v. Humanitarian Law Project, 561 U.S. 1 (2010), the U.S. Supreme Court upheld 6-3 a federal law that prohibited the providing of service, training, and “expert advice or assistance” to groups designed as foreign terrorist organizations. In upholding the law, the Court rejected vagueness, free speech, and freedom of association challenges.

The law criminalized “knowingly provid[ing] material support or resources to foreign terrorist organizations. In 2001, as part of the USA PATRIOT ACT, Congress amended the term “material support” to include providing “expert advice or assistance” to such groups. Two U.S. citizens and six domestic organizations, including lead plaintiff Humanitarian Law Project, challenged the law on First and Fifth Amendment grounds. The Humanitarian Law Project provided aid to the Kurdistan Workers’ Party, while other plaintiffs assisted the Liberation Tigers of Tamil Eelam. Both of these groups were designated as foreign terrorist organizations.

The litigation had a convoluted history that began in 1998. In its latest iteration, the plaintiffs had filed a second lawsuit in 2003, asserting First Amendment and vagueness challenges. A federal district court held the terms “expert advice or assistance” unconstitutionally vague, but rejected the free-speech and free-association claims. On appeal, the Ninth U.S. Circuit en banc also rejected the First Amendment claims but remanded the case back down to the district court since Congress had again amended the definition of “material support” in the Intelligence Reform and Terrorism Prevention Act of 2004 to include the term “service.”

On remand, the district court granted partial relief to the plaintiffs on vagueness grounds.  Once again, the Ninth Circuit affirmed that the terms “training,” “expert advice or assistance”, and “service” were unconstitutionally vague.

On further appeal, the U.S. Supreme Court reversed and upheld the statute.  In his majority opinion, Chief Justice John G. Roberts, Jr. first addressed the vagueness argument.  He reiterated that, unlike an overbreadth challenge, “a Fifth Amendment vagueness challenge does not turn on whether a law applies to a substantial amount of protected expression.” He reasoned that the terms were clearly defined in the federal law.

Roberts then addressed the free-speech claim. The U.S. Government, represented by Solicitor General Elena Kagan, had argued that the law was constitutional because it regulated mainly conduct, not speech. This implicates the so-called speech-conduct dichotomy in First Amendment law. The plaintiffs, on the other hand, had argued that the statute infringed on core political speech. Roberts rejected both of these positions as extreme.

Addressing the government’s argument, he noted that the law impacted speech rather than conduct. The government had argued that the law only incidentally impacted speech and, thus, argued for application of the so-called “O’Brien Test” from the draft-card burning case, United States v. O’Brien (1968). Roberts rejected this, writing that “O’Brien does not provide the applicable standard for reviewing a content-based regulation of speech.”

However, he also rejected the plaintiffs’ argument that the statute infringed on pure political speech, pointing out that most of the “material support” prohibited by the law did not involve speech. Instead, the law clearly prohibits some speech that may provide “material support” to groups designated as foreign terrorist organizations.

As a content-based law, Roberts subjected the law to strict scrutiny.  The government has a compelling interest of the highest order – national security and protecting the country from foreign terrorism.  He said the Court must defer to Congress’ judgment that providing even peaceful aid to these groups could aid these groups more nefarious efforts. “Such support frees up other resources within the organization that may be put to violent ends,” Roberts wrote. “It also importantly helps lend legitimacy to foreign terrorist groups — legitimacy that makes it easier for those groups to persist, to recruit members, and to raise funds — all of which facilitate more terrorist attacks.”

Roberts then addressed the plaintiffs’ freedeom of association claims. The plaintiffs contended that the law infringed on freedom of association, similar to associational-type claims associated with individuals who attended meetings of the Communist Party, such as De Jonge v. Oregon (1937), or joined the Communist Party, such as United States v. Robel (1967). Roberts rejected this claim for the same reasons as he rejected the free-speech claims.  The law does not prohibit mere association, but providing “material support” to these groups.

Justice Stephen Breyer, joined by Justices Sonia Sotomayor and Ruth Bader Ginsburg, authored a dissenting opinion.  He agreed that the statute was not unconstitutionally vague and that the government had a compelling governmental interest in combating terrorism.  However, he believed that the law was unconstitutional because it punished “the communication and advocacy of political ideas and lawful means of achieving political ends.”