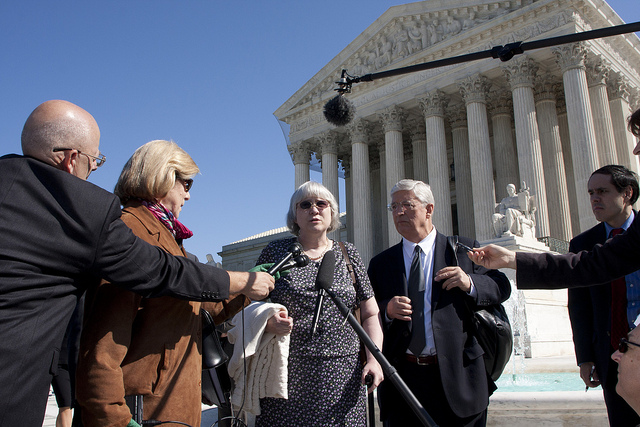 Hosanna-Tabor Evangelical Lutheran Church and School v. Equal Employment Opportunity Commission (2012) was the first time the U.S. Supreme Court used a “ministerial exception” as the basis for rejecting a suit alleging employment discrimination. Cheryl Perich, pictured here in front of the Supreme Court in 2011, had been fired by a Lutheran school after returning from disability leave. The Supreme Court said that under the First Amendment the government could not award Perich without punishing the church. (Photo by Maria Matveeva and published with permission from Americans United for Separation of Church and State)

The case arose in Redford, Michigan, out of a controversy between the Hosanna-Tabor Evangelical Lutheran Church and School, which is part of the Lutheran Church—Missouri Synod, and a school employee, Cheryl Perich. The school distinguished between “called” staff member, who undergo religious education and are officially called to their work by the church, and “lay” teachers who are not even required to be Lutheran. The school employed Perich as a lay teacher, but asked that she become a called teacher, which she did.

After teaching kindergarten and fourth grade for five years, which included teaching religion class, attending chapel, and even sometimes leading services, she took disability leave for narcolepsy. When she wanted to return, the school said that it had filled her position with a lay teacher. She returned and demanded written documentation that she had reported to work, after which the school fired her and rescinded her call on the basis of her “insubordination” and her decision to take her case to Court rather than follow church policy to resolve such matters internally.

Perich filed a claim with the Equal Employment Opportunity Commission for what she considered to be violations of the Americans with Disabilities Act of 1990, which prevents retaliation against individuals who have filed disability-based claims. The District Court issued  summary judgment to Hosanna-Tabor on the basis of the ”ministerial exception,” which prohibits courts from interfering with internal decisions by church authorities.” The 6th Circuit Court of Appeals reversed. Although it too recognized a ministerial exception, it did not believe that Perich qualified since her duties were largely the same as when she was a lay teacher.

Chief Justice John Roberts wrote the decision for a unanimous Court. Observing that there was sometimes tension between the free exercise and establishment clauses of the First Amendment, Roberts noted that both clauses “bar the government from interfering with the decision of a religious group to fire one of its ministers.”  Tracing conflicts between church and state over religious offices in Great Britain to the Magna Carta of 1215, the Act of Supremacy of 1534 (which made the English monarch the head of the church), various Acts of Uniformity and then through the colonial experience of the Puritans and the Quakers, Roberts noted that even the southern colonies, which accepted the established church, were sometimes involved in controversies over the choice of leaders. The First Amendment precluded the possibility of a national church, with James Madison specifically refusing in 1811 to give advice to John Carroll, America’s first Catholic bishop, about church functionaries, and subsequently refusing to sign a bill incorporating the Protestant Episcopal Church in the nation’s capital.

Precedents had allowed religious organizations to make their own employment choices

Roberts cited a number of subsequent Court decisions, including Watson v. Jones (1872), Kedroff v. Saint Nicholas Cathedral (1952), and others in which the courts had allowed hierarchical religious organizations to establish their own rules and make their own choices. Courts of appeal have uniformly accepted a “ministerial exception” as a way of keeping the state out of church employment decisions. There should be no need for churches to rely on freedom of association, as recognized in Roberts v. United States Jaycees (1984) since it is “the text of the First Amendment itself, which gives special solicitude to the rights of religious organizations.” Similarly, the Court’s decision in Employment Division v. Smith (1990), which refused to exempt churches from generally-applicable criminal laws, is inapplicable because the case at issue involves “government interference with an internal church decision that affects the faith and mission of the church itself.”

Court could not award Perich without punishing church

Roberts believed that Perich clearly qualified under the ministerial exception. The church held her out as a “called” minister, and she accepted this designation. She taught religion and accepted a special housing allowance for ministers. According to Roberts, the 6th Circuit committed three errors in deciding otherwise.

Roberts observed that “The issue before us . . . is not one that can be resolved by a stopwatch.” Any award on Perich’s behalf would be a penalty on the church for exercising its ecclesiastical judgment. Roberts, however, limited the specific ruling to cases involving employment discrimination.

Justice Samuel Alito also wrote a concurring opinion, joined by Justice Elena Kagan, in which he noted that the term “minister” and “ministerial exception” might apply to church leaders without this official title. In such cases, the Court should consider  “the function performed by persons who work for religious bodies,” and in this case it was clear that Perich so qualified. Churches have historically served as private associations that acted as buffers between individuals and the State, and the ministerial exception serves to further this interest.

Supporters of the decision lauded it as victory for religious freedom. However, detractors worried that the broad application of the “ministerial exception” gives churches a license to discriminate.