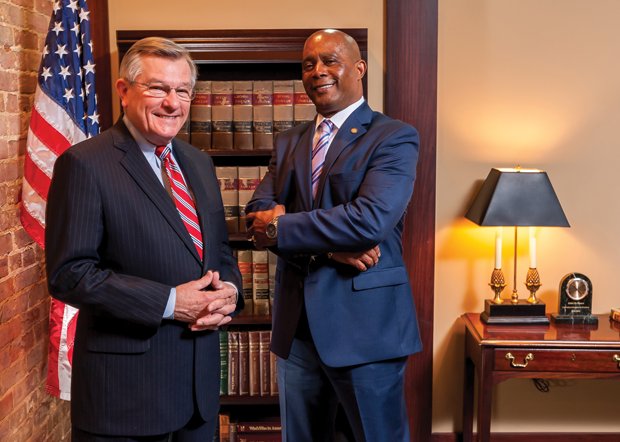 In Lane v. Franks (2014), the U.S. Supreme Court unanimously ruled that the First Amendment protected a public employee, Edward Lane, right, who was terminated by his employer after he provided truthful court testimony pursuant to a subpoena. Lane is pictured with his attorney John Saxon, left. (Photo courtesy of Joe De Sciose, published in Business Alabama)

In Lane v. Franks, 134 S.Ct. 2369 (2014), the U.S. Supreme Court unanimously ruled that the First Amendment protected a public employee who was terminated by his employer after he provided truthful court testimony pursuant to a subpoena.

Edward Lane served at Central Alabama Community College as the Director of Community Intensive Training for Youth. Lane conducted an audit of the program and discovered some improprieties committed by Suzanne Schmitz, then an Alabama state representative who was on the program’s payroll as a counselor.

Lane fired Schmitz for her refusal to perform counselor duties.

The representative’s termination caused controversy and an FBI investigation into Schmitz’s activities with the college. This led to federal mail fraud and other charges levied against Schmitz.

At Schmitz’s trial, Lane testified truthfully concerning what he knew. The first trial led to a hung jury. The government retried Schmitz and Lane testified again. The jury convicted Schmitz of several counts.

Lane argued he was fired for truthful court testimony, whistleblowing on Schmitz

Lane later was terminated. He filed a federal lawsuit, contending that the reason for his termination was his truthful court testimony and blowing the whistle on Schmitz.

The college, including the college president Steve Franks, contended that the termination was related to budgetary shortfalls and other reasons unrelated to Lane’s in-court testimony.

A federal district court ruled in favor of Franks and the college. The district court relied in part on the Garcetti decision, in which the Court had ruled that public employees have no First Amendment protection for official, job-duty speech. The Eleventh U.S. Circuit Court of Appeals affirmed.

Lane appealed to the U.S. Supreme Court, which unanimously ruled in his favor and reinstated his lawsuit. Justice Sonia Sotomayor reasoned that public employees often are in the best position to speak about issues of public importance, citing the Court’s seminal public employee free-speech decision Pickering v. Board of Education (1969).

Sotomayor also reasoned that Garcetti did not bar Lane’s claim, because providing court testimony was not a part of Lane’s regular job duties.

“Truthful testimony under oath by a public employee outside the scope of his ordinary job duties is speech as a citizen for First Amendment purposes,” she wrote. “That is so even when the testimony relates to his public employment or concerns information learned during that employment.”

Justice Clarence Thomas wrote a concurring opinion, stressing that the decision did not address the question of whether the First Amendment would protect a public employee “when he testifies in the course of his ordinary job responsibilities.”