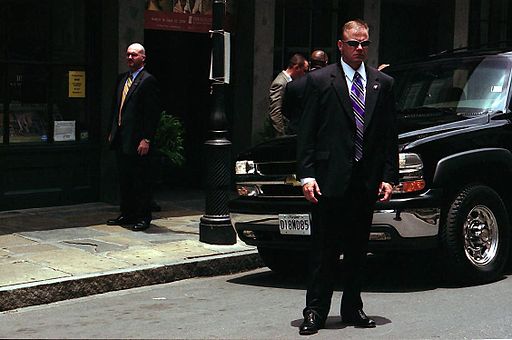 The Supreme Court ruled that qualified immunity applied to Secret Service agents who had arrested a man after he challenged Vice President Dick Cheney in a Colorado mall about his Iraq policies, touching his shoulder in the process. The man had sued, claiming that he was arrested in retaliation for exercising his First Amendment rights. Justice Thomas wrote “[t]his Court has never recognized a First Amendment right to be free from a retaliatory arrest that is supported by probable cause..." (Photo of Secret Service agents in New Orleans by Chuck Patch in Wikimedia Commons, CC BY-SA 2.0)

In Reichle v. Howards, 566 U.S. 658 (2012), the U.S. Supreme Court held that two Secret Service agents, Gus Reichle and Dan Doyle, were entitled to immunity for actions that they had taken in arresting Steven Howards, whom they had probable cause to detain under the Fourth Amendment even though there were allegations that they had made the arrest in retaliation for statements that might be protected by the First Amendment.

A federal district court  had entered summary judgment for the agents, but the Tenth U.S. Circuit Court of Appeals, while rejecting the Fourth Amendment claims, had allowed the case to proceed on the First Amendment claims.

The case arose at a mall in Beaver Creek, Colorado, where agents heard Howards saying he was going to ask Vice President Dick Cheney “How many kids he’s killed today.”  He subsequently told Cheney that his “policies in Iraq are disgusting,” and touched his shoulder in the process.

Thomas identified two central issues: “whether a First Amendment retaliatory arrest claim may lie despite the presence of probable cause to support the arrest, and whether clearly established law at the time of Howards’ arrest so held,” but decided only to address the second.

In so doing, Thomas argued that “[q]ualified immunity shields governmental officials from civil damages liability unless the official violated a statutory or constitutional right that was clearly established at the time of the challenged conduct.”  This required that a reasonable official would understand that his or her behavior violates a right. However, Howards did not establish that threshold here because “[t]his Court has never recognized a First Amendment right to be free from a retaliatory arrest that is supported by probable cause; nor was such a right otherwise clearly established at the time of Howard’s arrest.”

Although there were some opinions from circuit courts establishing the unlawfulness of arrests in retaliation for exercising First Amendment rights, in Hartman v. Moore (2006), the U.S. Supreme Court had held that an individual could not sue for retaliatory prosecution in violation of the First Amendment when the charges were supported by probable cause. And, at the time of Howards’ arrest, “Hartman’s impact on the Tenth Circuit’s precedent governing retaliatory arrests was far from clear.”

Indeed, at the time, retaliatory arrests and retaliatory prosecutions were treated similarly, and a “reasonable official” might have done the same. The decision in Wayte v. United States (1985) gives further support to this view.

Thomas specified that he was not saying that Hartman’s rule, or all of its rationale, would apply to retaliatory arrests but that the ruling “injected uncertainty into the law”, for which the agents should not be held liable.

In her concurring opinion Ginsburg stressed that the agents in question were not “ordinary law enforcement officers,” but that they had a big responsibility in guarding the vice president, which often required swift decision-making.  She did not think that one could infer “retaliatory animus” on the basis of their actions in arresting Howards.