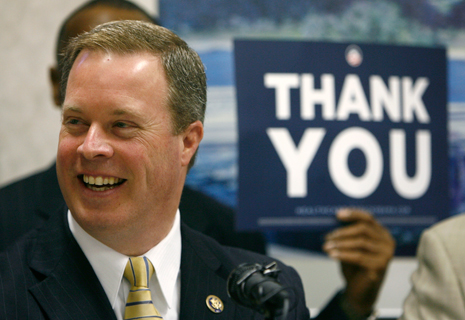 Rep. Steve Driehaus, D-Ohio, smiles as he is greeted at a news conference discussing the recently enacted health care reform legislation at a community health center in 2010 in Cincinnati. Driehaus was involved in the Supreme Court case Susan B. Anthony List v. Driehaus (2014), where the Supreme Court said a pro-life group had standing to challenge a false statements law in Ohio. During a campaign, the group had criticized Driehaus with a statement he said was false. (AP Photo/David Kohl, used with permission from the Associated Press)

In Susan B. Anthony List v. Driehaus, 134 S.Ct. 2334 (2014), the U.S. Supreme Court unanimously ruled that those who challenged the constitutionality of an Ohio law that criminalized the making of false statements during a campaign had standing to pursue their legal claims.

A panel of the Commission determined there was probable cause that the pro-life group violated the false statements law. SBA then filed suit in federal district court, alleging that the law violated the First Amendment.

After Driehaus lost the election, he moved to withdraw his complaint. Once the Commission’s proceedings were terminated, Susan B. Anthony List amended its complaint, alleging that the false statements law was unconstitutional on its face and as-applied.

The District Court dismissed the suit, finding it non-justiciable. The Sixth Circuit affirmed, finding the case was not ripe. SBA and another group (COAST) whose separate lawsuit had been consolidated with SBA petitioned for Supreme Court review. The U.S. Supreme Court determined that SBA had standing to challenge the constitutionality of the law.

Writing for a unanimous Court, Justice Clarence Thomas determined that the plaintiffs had presented a credible threat of enforcement. Both SBA and COAST indicated an intention to engage in similar expressive conduct that led to complaints being filed against them with the Ohio Elections Commission.

Scalia cited several cases – including Holder v. Humanitarian Law Project (2010) and Virginia v. American Booksellers Ass’n (1988) – where the Court had found groups had standing to assert their pre-enforcement challenges to laws. He also noted that the two groups’ speech arguably could be found to violate the law. This was enough for the groups to have standing.

Thomas distinguished Golden v. Zwickler (1969) as an example of where the threat of future prosecution against the distributors of anonymous leaflets was “wholly conjectural.”   Scalia noted that these groups intended to criticize other candidates whom they opposed on their respective issues.

“Finally, the threat of future enforcement of the false statement statute is substantial,” wrote Thomas. “Most obviously, there is a history of past enforcement here: SBA was the subject of a complaint in a recent election cycle.”

On remand, a federal district court invalidated the Ohio law in 2014.  The Sixth Circuit affirmed that ruling and also ruled the law unconstitutional in 2016.