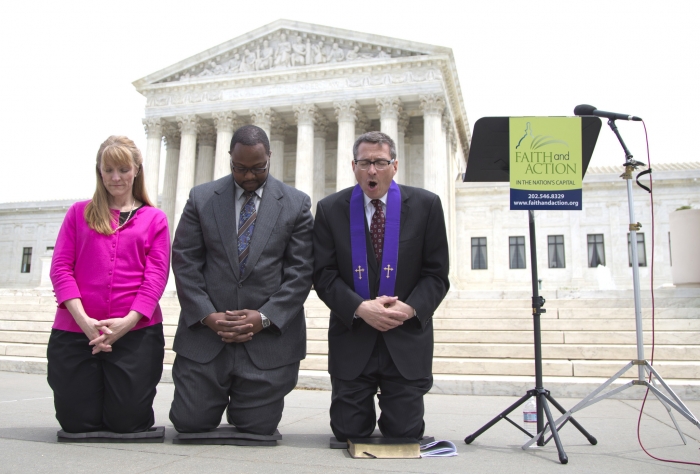 In Town of Greece v. Galloway, 572 U.S. _ (2014), a sharply divided U.S. Supreme Court ruled 5-4 that a New York town’s practice of having prayer before town meetings did not violate the Establishment Clause. The Court majority reasoned that the town’s practice was consistent with the legislative prayer upheld by the Court in Marsh v. Chambers (1983).

The Town of Greece, near Rochester, instituted a practice of opening monthly town board meetings with a prayer. The majority of the prayers were delivered by Christian ministers, though a Jewish layman, a chairman of the Baha’i temple, and a Wiccan priestess also delivered prayers.

Two residents, Susan Galloway and Linda Stephens, had complained about the prayers.  They sued in federal court, contending that the town’s practice violated the Establishment Clause. A federal district court upheld the town’s practice, but the Second U.S. Circuit Court of Appeals reversed.  The Second Circuit reasoned that a reasonable observer could find that the town had endorsed Christianity.

The town appealed to the U.S. Supreme Court and prevailed.  In his majority opinion, Justice Anthony Kennedy relied on Marsh and the historical practice of legislative and other bodies opening their sessions up with prayer: “Marsh stands for the proposition that it is not necessary to define the precise boundary of the Establishment Clause where history shows that the specific practice is permissible.”

Kennedy rejected the idea that the prayers before the town meetings needed to be neutral in content or nonsectarian. “Once it invites prayer into the public sphere, government must permit a prayer giver to address his or her own God or gods as conscience dictates, unfettered by what an administrator or judge considers to be nonsectarian.” Kennedy wrote that the town must follow a policy and practice of nondiscrimination. He also emphasized that the town’s practice did not amount to religious coercion, but merely offense. “Offense, however, does not equate to coercion,” he wrote.

Justice Samuel Alito authored a concurring opinion, joined by Justice Antonin Scalia.  He emphasized the historical pedigree of prayer before local governmental bodies and responded to various points made in the principal dissenting opinion of Justice Elena Kagan.

Justice Clarence Thomas also wrote a concurring opinion, stressing his view that the Establishment Clause is properly understood as a federalism provision.  Thomas pointed out that in 1789, six states had established churches.

Dissenters said the prayer was not inclusive

Justice Kagan – joined by Justices Ruth Bader Ginsburg, Stephen Breyer, and Sonia Sotomayor – authored the principal dissent.  She wrote that the town had violated “the norm of religious equality” by consistently favoring Christianity over other religions.  She distinguished Marsh on two grounds: (1) the town’s meetings involved participation by ordinary citizens rather than state legislators in Marsh; and (2) the invocations were “predominately sectarian in content.”

Justice Breyer also wrote a dissenting opinion, pointing out that the town of Greece had failed to establish an “inclusive prayer.”