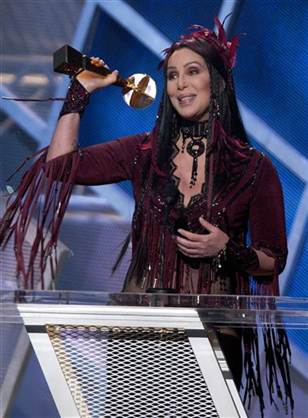 Cher accepts a lifetime achievement award during the 2002 Billboard Music Awards show. During the show, Cher used the F-word, which the FCC said violated decency standards, changing their policy on fleeting expletives. The Court found that the new indecency standards were too vague but did not address the First Amendment implications of the indecency policy. (AP Photo/Joe Cavaretta, used with permission from the Associated Press)

Federal Communications Commission v. Fox Television Stations, 567 U.S. 239 (2012), is a followup to a decision by the same name that was issued in 2009. In the 2009 case, the U.S. Supreme Court ruled that the FCC decision to modify its indecency enforcement regime to include fleeting expletives was neither arbitrary or capricious and remanded the case to the the 2nd U.S. Circuit Court of Appeals.

The appellate court found that the new indecency standards were unconstitutionally vague, and Justice Anthony Kennedy, writing for seven members of the Court, upheld that decision in the 2012 ruling. Justice Ruth Bader Ginsburg filed a separate concurring opinion and Justice Sonia Sotomayor did not participate.

Title 18 U.S.C. Sec. 1464 provides punishment for those who utter “obscene, indecent, or profane language” on radio and television, and the FCC is charged with administering the law, which it has been doing since the 1970s. In 1978, the commission found a monologue by George Carlin (“Seven Dirty Words"), broadcast during prime broadcast hours, to be indecent, and the Court upheld this decision in FCC v. Pacifica Foundation (1978), pointing to the pervasive influence of mass media and its accessibility to children.

The FCC did not pursue any other such actions between 1978 and 1987, when it decided that it was applying Pacifica too narrowly and should go beyond the “seven dirty words” identified in Pacifica. It continued, however, to stress the difference between isolated and repeated broadcasts of indecent language.

The FCC issued a policy statement in 2001 to change this policy restating that it would continue to focus on words that depict sexual or excretory organs or activities in “patently offensive ways” as measured by “contemporary community standards.” It moved away, however, from its previous position that “fleeting or isolated” words were less harmful.

During the 2002 Billboard Music Awards, which Fox broadcast, the singer Cher used the F-word, as did reality-TV star Nicole Richie in 2003. That same year, ABC televised an episode of NYPD Blue, which briefly showed female buttocks and a breast in a shower scene. The FCC found both the fleeting expletives and the fleeting portrays of nudity to be actionable. Although the first decision on Fox found that the new FCC policy was neither arbitrary or capricious, a court of appeals found that it was “unconstitutionally vague” and inconsistent with prior precedents.

Justice Kennedy identified “fair notice” as fundamental to due process. Such notice both allowed regulated parties to know what was required of them and prevented arbitrary and discriminatory actions. In this case, the FCC had moved abruptly from an enforcement policy that stressed repetition to one that included fleeting expletives and depictions of nudity.

Although the commission had not imposed a penalty on Fox, the company should not have to depend on the mercy or noblesse oblige of the agency, Kennedy said, and the FCC decision could affect the reputation of the network. Moreover, the fines levied on ABC were substantial and could not be justified, as the FCC had sought to do, by an ambiguous statement from a 1960 FCC decision.

Having invalidated the FCC actions, Kennedy added three limits to the scope of the Court’s decision. He noted first that the Court was not specifically addressing the First Amendment implications of the indecency policy, and it was not reconsidering Pacifica. Second, the Court was not specifically addressing the constitutionality of the FCC’s most recent policy punishing fleeting expletives and nudity. Third, the decision left the FCC to adopt further modifications of its policy.

In her single-paragraph concurrence, Justice Ginsburg asserted her belief that the Pacifica decision had been wrongly decided and had been overtaken by time and technological advances.