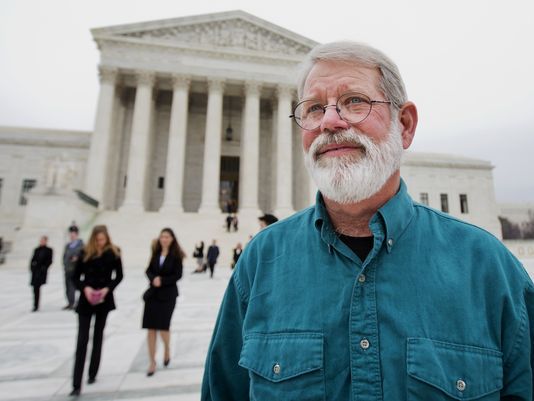 John Dennis Apel stands in front of the Supreme Court in Washington, Wednesday, Dec. 4, 2013. Apel had been barred from entering any part of Vandenberg Air Force Base on the central California coast, including the protest area on a public highway that traversed the base. The Supreme Court unanimously ruled in United States v. Apel that the government had the right to guard the military base and rejected Apel's claims. (AP Photo/Manuel Balce Ceneta, with permission from The Associated Press.)

In United States v. Apel, 571 U.S. ____ (2014), Chief Justice John G. Roberts, Jr. wrote a decision for a unanimous Supreme Court in which he upheld a military base commander’s authority to exclude a protestor from publicly accessible areas of the base after the protestor had previously engaged in trespassing and vandalism.

The case arose from Vandenberg Air Force Base in central California, which was traversed by two state highways but was otherwise designated as a “closed base” not open to civilians.

There was an area that had been designated for peaceful protests, but the base commander had retained authority and limited protests to those that were planned in advance.

John Dennis Apel was an antiwar activist who had been sentenced after trespassing beyond protest boundaries and throwing blood on a sign for the base.  Despite being barred from returning, he continued to trespass, and was convicted and fined by a magistrate judge.  Although the federal district court rejected Apel’s appeal, he succeeded at the Ninth U.S. Circuit Court of Appeals, which concluded that the easement had deprived the government of control over the portion of the base where Apel had protested.

The law had given the U.S. jurisdiction over the base, but Apel argued that he was not within the base because he was on the road easement rather than within fenced areas.

Roberts, however, determined that the law vested the military commander with control over the entire area bounded by the base. Although some executive branch documents said that control was limited to areas of the base over which the government had exclusive possession, Roberts pointed out that these documents were not legally binding.

Court: Military does not forfeit rights to guard bases because of easement

The government had the right to guard some areas more securely (as by constructing a fence) without forfeiting its rights elsewhere within the area of its authority.  Moreover, the easement for the highways had specifically authorized the base commander to close the roads when this was necessary to protect U.S. interests.

Roberts said that “we decline Apel’s invitation to require civilian judges to examine U.S. military sites around the world, parcel by parcel, to determine which have roads, which have fences, and which have a sufficiently important, persistent military purpose.”

Court did not address constitutionality of specific U.S. Code at issue

Roberts did not address whether the regulations has been properly applied to Apel because the Court of Appeals had not addressed that issue.

Justice Samuel Alito also authored a one-paragraph concurrence indicating that there was no need to decide on the constitutionality of the specific section of the U.S. Code at issue in this case.

After the case was remanded back to the appeals court, the Ninth Circuit issued a short per curiam opinion in August 2014, affirming the ruling of the district court.