By Hana M. Ryman and J. Mark Alcorn
Other articles in Events 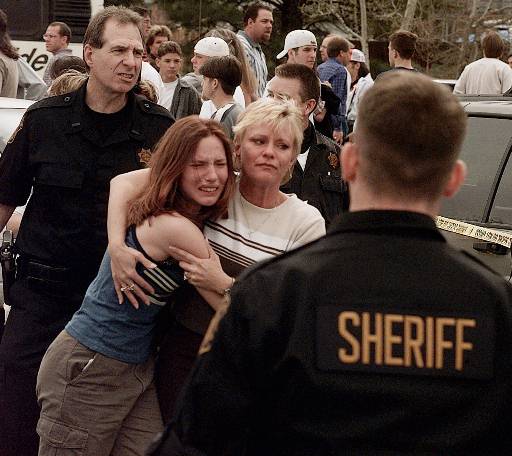 The Columbine High School shooting in 1999 altered schools' balance between students' First Amendment rights and the safety and security of schools. The courts have attempted to distinguish between "true threats" from nonviolent expression. In this photo, a woman embraces her daughter after they were reunited following the shooting at Columbine High School. (AP Photo/Ed Andrieski, used with permission from the Associated Press)

In April 1999, at Columbine High School in Littleton, Colorado, two students went on a shooting rampage, killing 12 fellow students and a teacher, wounding 24 others, and then committing suicide.

This and other violent high school shootings have altered school administrators’ perception of the balance between students’ First Amendment rights and safety and security at school.

It was not until the middle of the twentieth century that courts began to accord individual freedoms in school. In West Virginia State Board of Education v. Barnette (1943), the Supreme Court ruled that students could refuse, on free speech grounds, to salute the flag.

Just 35 years prior, the Wisconsin Supreme Court had ruled in State v. School District Number 1 (1908) that a district could suspend students for having ridiculed their principal in a poem published in a local newspaper.

Students gained further protections in Tinker v. Des Moines Independent Community School District (1969), when the Supreme Court ruled that school officials could not censor student expression unless they could reasonably predict that such expression would create substantial disruption to the educational environment or trample the rights of others.

Before the Columbine shooters went on their rampage, they had threatened fellow students and had stated their hatred of them on the Internet.

Fearful after Columbine that free expression might devolve into acts of violence, school administrators expanded zero-tolerance policies relative to drugs and weapons to include controversial student expression in poetry, songs, and art, especially if such expression appeared to be tied in any way to potential acts of violence.

A high school student in Washington was suspended for five days for creating the “Unofficial Kentlake High School Home Page” on the Internet. In addition to other postings, it contained a mock obituary section that with the permission of the subjects described the humorous and imagined deaths of classmates.

The student immediately removed the site after a local television station referred to the obituaries as a “hit list.” The day after the segment aired, school officials suspended the student, who then filed suit against the district contesting this punishment.  A federal district judge ruled for the student in Emmett v. Kent School District No. 415 (W.D. Wash. 2000) because the district presented no evidence that the site threatened anyone; it did not manifest violent behavior; and the site was not created on school property.

Another federal district judge in Washington ruled in 2000 that a student had been wrongfully expelled in 1998 for writing a poem that administrators perceived as threatening. The judge in LaVine v. Blaine School District (W.D.Wash. 2000) ruled that the poem was not a sincere expression of intent to harm or assault.

In Boman v. Bluestem Unified School District No. 205 (D. Kan. 2000), a federal district judge ruled that a school district in Kansas had violated the free speech rights of a student suspended for displaying a poster in a school hallway that administrators viewed as threatening. The judge found no factual basis for believing that the student threatened harm to other students with her artwork or otherwise.

The judge cited portions of Tinker prohibiting schools from ignoring students’rights. In the post-Columbine era, courts have signaled to school districts that the fears of safety generated by events such as at Columbine do not give them carte blanche to dismiss students’ rights and that there must be a balance between school safety and protecting freedom of expression.