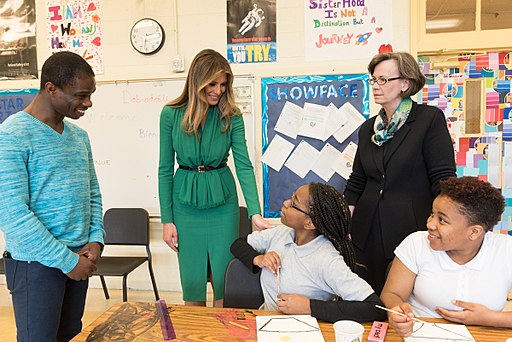 More states are allowing charter schools as an alternative to public schools in arrangements in which the charter schools are funded by the government, but operated by private entities. Because they are funded by government, do they have the same restrictions as a normal public school on promoting religion because of the First Amendment's establishment clause? Previous court rulings have allowed school vouchers for religious schools and individual tax credits for religious school tuition. (Photo is an official White House photo of First Lady Melania Trump sharing a moment with students at the Excel Academy Public Charter School on April 5, 2017, in Washington, D.C.)

Charter schools are schools that are publicly funded but privately managed, subject to state regulations respecting curricular and related matters.

In areas where they exist, students and their parents may choose them in preference to more traditional public schools, which are both publicly funded and publicly managed.

Charter schools are based on the idea that competition, and school choice, will foster the provision of better education.  They seem particularly popular in communities, like New Orleans, where public schools appeared to be failing, and they were a component of the No Child Left Behind Act of 2002.

Unlike purely private or parochial schools, charter schools do not charge tuition.

Because they are privately operated, it is not always easy to ascertain the degree to which they are bound by Supreme Court decisions like Engel v. Vitale (1963) and Abington School District v. Schempp (1963), which restrict devotional prayer and Bible reading since such exercises would no longer be mandated by the government.

Some previously tuition-driven private schools have converted to charter schools, while some states prevent this.

In that case, the Supreme Court upheld use of publicly-funded vouchers to enable low-income families in Cleveland, Ohio to send their children to religious schools against charges that such vouchers constituted aid to religion. The majority interpreted the program as neutral since students and parents exercised the choice as to which schools to attend.

In the case of Arizona Christian School Tuition Organization v. Winn, 131 S. Ct. 143 (2011), the Court further upheld an Arizona law by rejecting taxpayer standing to individuals seeking to challenge tax credits of up to $500 per taxpayer toward contributions to school tuition organizations, that included religious schools.

President Donald Trump’s recent appointment of Betsy DeVos, who is a strong advocate of both vouchers and charter schools, as Secretary of Education will likely keep charter school-related issues in the news.