By Deborah Fisher
Other articles in Issues Related to Speech, Press, Assembly, or Petition 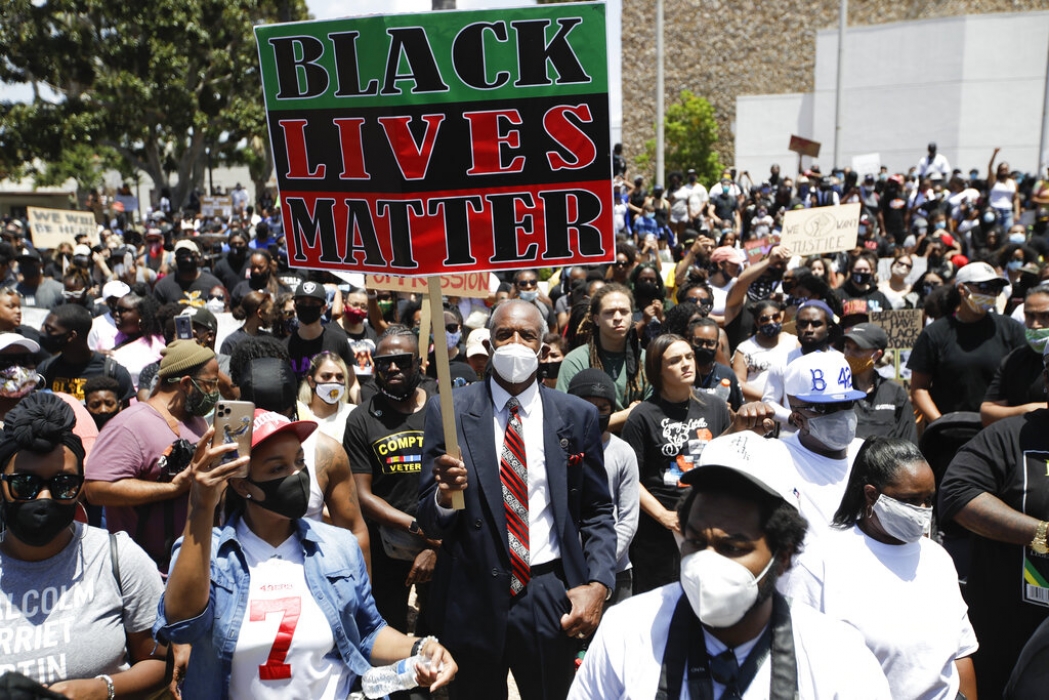 The Black Lives Matter movement is known for efforts to reduce violence against Black people by police. It uses protests to make its voice heard and agitate for change. In this photo, a demonstrator holds a Black Lives Matter sign on June 7, 2020 in  Compton, Calif., during a protest over the death of George Floyd. (AP Photo/Marcio Jose Sanchez, File)

California activist Alicia Garza first used the phrase “Black lives matter” in a 2013 Facebook post in which she was expressing frustration and anger over the acquittal of neighborhood watch coordinator George Zimmerman in the shooting death of unarmed Black teenager Trayvon Martin in Florida.

“[T]he sad part is, there’s a section of America who is cheering and celebrating right now. and that makes me sick to my stomach. we gotta get it together y’all… I continue to be surprised at how little Black lives matter. And I will continue that. stop giving up on black life…”

Her friend Patrisse Cullors turned the phrase into a social media hashtag #BlackLivesMatter and the two along with Opal Tometi helped popularize it.

In 2014, a white police officer shot and killed an 18-year-old Black man, Michael Brown, in Ferguson, Mo., setting off a week of protests. The hashtag #BlackLivesMatter became firmly associated with a movement to reduce police violence toward Black people, with its usage increasing dramatically on social media after a Ferguson grand jury decided not to indict the officer involved in Brown’s death.

Counter calls on social media, such as #BlueLivesMatter, sought to stress the dangers to which police officers are subjected when patrolling the streets; others have countered with #AllLivesMatter and #BrownLivesMatter social media tags to emphasize other viewpoints. But none have been as potent as #BlackLivesMatter.

A number of judges have barred attorneys and others from wearing Black Lives Matter pins or clothing in courtrooms, bringing up First Amendment concerns.

In 2020, the Black Lives Matter movement surged again to the front of minds of many Americans when a video captured the May 25 death of 46-year-old George Floyd after a Minneapolis police officer held him down with a knee on his neck for several minutes. Three officers looked on without taking apparent action. The video went viral and set off marches in cities across the globe that involved thousands of people protesting Floyd's death. Protesters also highlighted the police shootings of Breonna Taylor in Louisville on March 12 and Rayshard Brooks in Atlanta on June 12.

The Black Lives Matter movement itself has drawn strong reactions and generated debate over its political accomplishments and strategy. Some have pointed to its differences and similiarities with the Civil Rights Movement. (See Black Lives Matter at five: limits and possibilities and Setting the record straight on the Movement for Black lives.)

A Harvard-Harris study in 2017 found that a majority of Americans (57%) had a negative view of the movement. But a poll released June 12, 2020, following the George Floyd protests, showed that 67% supported the Black Lives Matter movement. Other polls have shown less American support for Black Lives Matter policy aims, such as defunding the police and shifting money into programs that help Black communities.

In addition to its use of social media, the movement relies on protests and marches to make its voice heard, build support and agitate for change. The response by police itself to the protests, which at times have ended in damage to private business and public property, has drawn criticism for use of military weaponry and combat gear.

Ashley M. Eick, writing as a J.D. candidate at the William and Mary Law School, has argued that such a militarized police response poses a chilling effect on the right of peaceable assembly, which American Founders guaranteed in the First Amendment (2016). Recognizing the importance of public safety, Eick argued that the state should have to prove the existence of a “clear and present danger” of violence before employing militarized forces (2016, p. 1255).

Deborah Fisher is director of the Seigenthaler Chair of Excellence in First Amendment Studies, and was a journalist for 25 years. John R. Vile, a political science professor at Middle Tennessee State University, also contributed to this entry.