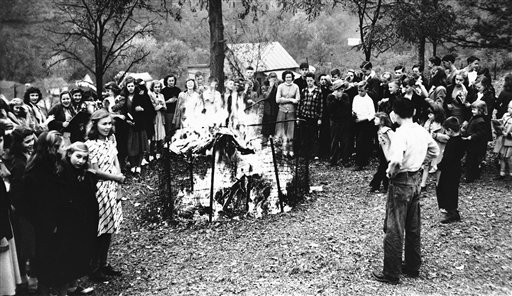 In the late 1940s and 1950s, concerns about comic books led to burnings in towns across the country. Here, 13-year-old David Mace officiated as Spencer grade school children burned 2,000 comic books they have been collecting for weeks in Spencer, W. Va., on Oct. 26, 1948. The campaign was initiated by the parent-teacher association on the ground the books are mentally and morally injurious to boys and girls. (AP Photo)

The Comic Book Legal Defense Fund (CBLDF) is a New York based non-profit organization that was founded in New York in 1990 by Denis Kitchen.

The organization comes to the aid of comic book and graphic novel writers and sellers faced with prosecution.  Such works, which sometimes feature sex and violence, link pictures with texts and often appeal to young readers.

Although such works have a long lineage, they have been a subject of popular concern at least since the 1950s when Dr. Fredric Wertham, a psychiatrist, concluded that such literature contributed to juvenile delinquency.

Courts have struck down regulations of comic books

Although Katzev v. County of Los Angeles (Cal. 1959) provides an example of a case where a Court struck down regulations of “crime” comics on the basis that such laws were overly broad, prosecutions have continued on other fronts.

Since it was established, the CBLDF has provided expert witnesses and defended comic book authors against having to pay sales taxes that were not applied to other authors and against charges that comic books are pornographic or corrupted the young.

In a study of key cases that the organization has defended, Professor Marc H. Greenberg observes that, despite the organization’s help, some defendants accept plea deals rather than go through trials or retrials (2022/2012).   Greenberg also documents how laws against obscenity are often vague and are sometimes enforced more severely on comic books than on other forms of literature.