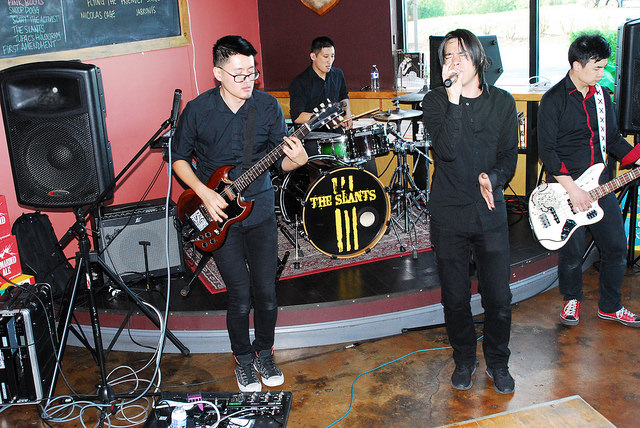 The Slants perform at an event hosted by the 1st Amendment Society in Maryland. The Portland-based Asian-American dance band is involved in a Supreme Court battle to trademark their name, which was originally denied by the U.S. Patent and Trademark Ofice because it was ruled offensive. The Slants say they have formed an identity "to take on stereotypes that people have about us, like slanted eyes, and own them." Embracing and owning a slur as a form of empowerment is their fundamental right, they said. (Via Grudnick on Flickr, public domain)

In Matal v. Tam, 582 U.S. __ (2017), the U.S. Supreme Court unanimously ruled 8-0 that a federal law prohibiting trademark names that disparage others was unconstitutional because “speech may not be banned on the grounds that it expresses ideas that offend.”

Simon Tam, the leader singer of the music band The Slants, sought to trademark the group’s name. While the term is derogatory to many, Tam believed that by taking the slur as the name of their band they could defuse the harmful power of the word. However, the Patent and Trademark Office denied the application, finding that the term was too offensive and disparaging.

Tam appealed to the U.S. Court of Appeals for the D.C. Circuit, which reversed on First Amendment grounds. The government then sought review by the U.S. Supreme Court.

In an opinion for the Court, Justice Samuel A. Alito, Jr. reasoned that the part of the trademark law that banned disparaging terms violated a “bedrock principle” of First Amendment law – that the government may not prohibit expression merely because it is offensive. He quoted Justice William Brennan’s famous passage from the flag-burning decision Texas v. Johnson (1989): “If there is a bedrock principle underlying the First Amendment, it is that the government may not prohibit the expression of an idea simply because society finds the idea itself offensive or disagreeable.”

Alito reasoned that the law was viewpoint discriminatory even though it applied to all groups, because “[g]iving offense is a viewpoint.” Because the law discriminated on the basis of content and viewpoint, Alito then addressed whether the Court should apply strict scrutiny or whether the law should be evaluated under intermediate scrutiny as a regulation of commercial speech under Central Hudson Gas & Elec. Corp. v. Public Serv. Comm. of N.Y. (1980).

Alito reasoned that the Court need not resolve whether the speech involved only commercial speech or also political speech, because the federal law at issue could not pass even the Central Hudson test. Under this test, the government must show that it has a substantial interest, that its regulation directly and materially advances the interest, and that the regulation is narrowly tailored. Alito reasoned that the federal law fails this test. He wrote that the clause was “far too broad” to be considered narrowly drawn.

Justice Anthony Kennedy wrote a concurring opinion to explain “in greater detail why the First Amendment’s protections against viewpoint discrimination apply to the trademark here.” Kennedy explained that “by mandating positivity, the law here might silence dissent and distort the marketplace of ideas.”

Justice Clarence Thomas also wrote a concurring opinion in which he continued to advocate the view that restrictions on truthful commercial speech should be evaluated under strict scrutiny, rather than under the Central Hudson test.