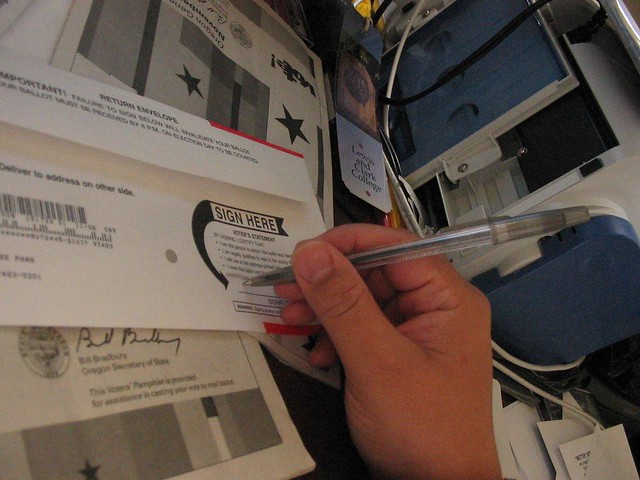 In Timmons v. Twin Cities Area New Party, 520 U.S. 351 (1997), the Supreme Court upheld a Minnesota law barring a candidate from one political party from appearing on the ballot as an endorsed candidate for another party. The decision dismissed constitutional claims that so-called fusion ballots are protected by the First Amendment. (Image of ballot signing via Chris Phan via Flickr, CC BY-SA 2.0)

In Timmons v. Twin Cities Area New Party, 520 U.S. 351 (1997), the Supreme Court upheld a Minnesota law barring a candidate from one political party from appearing on the ballot as an endorsed candidate for another party. The decision dismissed constitutional claims that so-called fusion ballots are protected by the First Amendment.

Fusion ballots were banned in most states

In the late nineteenth and early twentieth centuries, many states permitted political parties to “cross-endorse” candidates from another party. This resulted in candidates appearing on a separate line of the ballot for each party that endorsed them. This multiparty endorsement and appearance on ballots — or fusion balloting — often worked to the advantage of minor parties, allowing them to endorse more popular major-party candidates who would attract votes for the minor party. By the early part of the twentieth century, however, most states had barred fusion tickets to address concerns about corruption and fraud. Fusion ballots are rare today, with New York state being one of the few places where the practice remains legal.

Minnesota had an anti-fusion ballot law in 1994, when Andy Dawkins, a state legislator running for reelection as a Democrat, received the endorsement of the Twin Cities Area New Party, a minor political party. Neither the candidate nor the two parties objected to the cross-endorsement, but because of the anti-fusion law, election officials refused to recognize the New Party endorsement. Members of the New Party challenged the law based on the First Amendment freedom of association. A federal district court ruled against the party, but the Eighth Circuit Court of Appeals reversed.

The Supreme Court ruled that the anti-fusion law did not place a severe burden on the New Party’s First Amendment freedom of association rights. Writing for the Court, Chief Justice William H. Rehnquist asserted that a state has a right to impose reasonable regulations on political parties to further a compelling state interest in promoting party stability and ballot integrity. According to Rehnquist, no candidate has a right to use the ballot as a “billboard for political advertising.” As a result of Timmons, states are free to regulate the ballot and the manner in which candidates appear on it.