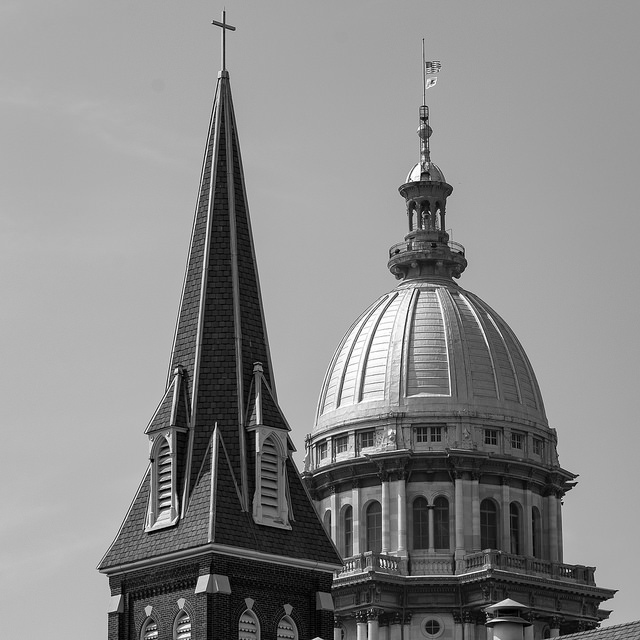 A number of states provided support for churches in America's early years. In Barnes v. First Parish in Falmouth (1810), Massachusetts Supreme Court Chief Justice Theophilus Parsons reasons that the value provided by religious teachers supported the happiness of citizens and it was appropriate for government to seek help from religions since "man is born not only a social, but a religious being." (Photo by Jeff Sharp via Flickr, CC by 2.0)

Given the prominence of decisions striking down state and federal laws on the basis of the establishment clause of the First Amendment, it is useful to remember that a number of states had religious establishment in the early years and that Massachusetts provided for state support for religion until 1833.

Moreover, even today, Justice Clarence Thomas argues that one of the purposes and effects of the establishment clause, which he therefore does not think should apply to the states, was to secure such state establishments against federal intervention.

Barnes sought tax money from Universalists that had gone to Congregationalists

One case that illumines the role of religion prior to disestablishment is the decision of the Massachusetts Supreme Court in Barnes v. First Parish in Falmouth, 6 Mass. 400 (1810). The decision was written by Chief Justice Theophilus Parsons on a Court that also included Samuel Sewall, George Thatcher and Isaac Parker.

The case arose when Thomas Barnes, a Universalist preacher and teacher, sought support from the estates of James Buxton and Amos Knight, Universalists, whose money had instead gone to the support of the established Congregational minister.

Article III of the state Constitution provided that:

"The people of this Commonwealth have a right to invest their legislature with the power to authorize and require, and the legislature shall, from time to time, authorize and require, the several towns, parishes, precincts, and other bodies-politic or religious societies to make suitable provision, at their own expense, for the institution of the public worship of God and for the support and maintenance of public Protestant teachers of piety, religion, and morality." (Anderson, 2917, p. 52).

Justice Parsons argued that the happiness of citizens depended on knowledge and practice of “moral duties, which comprehend all the social and civil obligations of man to man, and of the citizen to the state.”

State instruments of law and coercion “cannot oblige to the performance of the duties of imperfect obligation; as the duties of charity and hospitality, benevolence and good neighbourhood; as the duties resulting from the relation of husband and wife, parent and child; of man to man as children of a common parent; and of real patriotism, by influencing every citizen to love his country, and to obey all its laws” (p. 405).

Court upheld tax because man is 'a religious being'

Governments therefore can seek help from religions since “man is born not only a social, but a religious being” (p. 406). Christianity has the advantage of appealing not only to rewards and punishments in the present life but in that to come.

Parsons sought to answer objections that the Massachusetts establishment violated liberty of conscience, that it was “unreasonable and intolerant,” and that it was “antichristian” because it was inconsistent with the Christian idea of persuasion rather than coercion. In answering the first objection, Parsons simply suggested that the state was using religious teachers to provide a service that it could have provided directly. In answering the argument from intolerance, he focused on the value of teachers who inculcated morality and good habits among the people. He answered the third objection by noting that the state was not attempting to control the religion of its citizens, but only to promote public utility by advancing public morality.

Massachusetts only allowed such payments to incorporated religious entities

Having argued that “it cannot be denied publick instruction in piety, religion, and morality, by protestant teachers, may have a beneficial effect beyond the present state of existence” (p. 411), Parsons nonetheless concluded that the state constitution only provided for the support of teachers from incorporated societies. By contrast, Barnes was a Universalist, not a member of such an incorporated society, and was not therefore eligible for support. Parsons argued that state law further confirmed this interpretation.

Virginia had opposed any tax to religious establishments

The position of Parsons and of Massachusetts was far different from the position (more frequently cited by the U.S. Supreme Court) that Thomas Jefferson and James Madison had taken in Virginia. In their state, they had opposed the imposition of any taxes to support religious establishments and secured the passage of the Virginia Statute for Religious Freedom. Although most members of the Massachusetts Court that Parsons headed were themselves Universalists, they did not focus on the fact that some religious groups (Baptists being especially prominent) might find the very idea of state incorporation antithetical to the idea that the right to preach and teach came directly from God and not from the states.