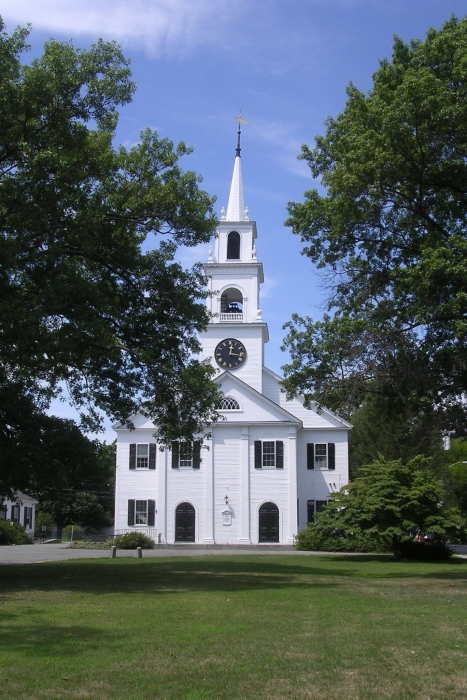 A dispute in Dedham, Massachusetts, resulted in an 1820 Massachusetts Supreme Court decision that illustrates some of the issues faces by states with established churches. In this case, members of the congregation who broke away wanted to continue to own the church property given by the state instead of it going to the "new congregation" under a pastor they had rejected. (Photo of one of the historical churches in Dedham, Massachusetts, First Church and Parish, by John Phelan, CC BY 3.0 via Wikimedia Commons)

The case of Baker v. Fales, 16 Mass. 488 (1820) illustrates some of the problems that states that retained established churches faced prior to their abolition in 1833. During this period, churches were expected to fulfill both secular and religious purposes.

Court had to decide which congregation owned church property

The case arose out of a dispute in Dedham, Massachusetts, that resulted when a local parish appointed a Unitarian pastor (a Mr. Lamson) that his congregation rejected. After the majority that rejected this appointment left the congregation to form a new one and elect a new group of deacons, the court had to decide whether or not the first congregation, or the newly formed one, owned the property that had originally been given to the church.

The decision by the Massachusetts Supreme Court was issued by Chief Justice Isaac Parker. Parker noted that the church at Dedham was originally the only one in the parish and that those who contributed to it likely did so because of their associations with that specific church.

Further referencing the manner in which the pastor was responsible for providing education to all citizens of the entire parish, Parker observed that “public sentiment was gradually verging towards the broad and liberal principle, which was adopted in the constitution; a principle, in reference to religious privileges, correspondent with that which was established in relation to civil rights, that the citizen who contributed towards the support of the government should have a share in the election of those who were to administer the government” (p. 520).

Commenting generally on the role of the church, Parker observed that:

"The authority of the church should be of that invisible, but powerful nature, which results from superior gravity, piety, and devout example.  It will then have its proper effect upon the congregation, who will cheerfully yield to the wishes of those who are best qualified to select the candidate.  But as soon as it is challenged as a right, it will be lost.”

Parker further observed that those who had broken away from the Dedham church could join “any other church and society, or they may initiate a new society; so that they are neither obliged to hear not to pay a minister, in whose settlement they did not concur.” He added that “It is true, if there are any parish funds, they will lose the benefit of them by removal; but an inconvenience of this sort will never be felt, when a case of conscience is in question.”

Giovan Venable observes that in holding “that the title holder of any church property was the territorial parish, which taxed its inhabitants in order to support itself” the “courts in Massachusetts treated Massachusetts Congregationalism much like British courts had treated the Anglicanism from which the Bay Colonists had liberated themselves” (1989, p. 721).

Modern cases like Maryland and Virginia Eldership of the Churches of God v. Church of God at Sharpsburg (1970) reflect the modern doctrine that in resolving disputes over church property, courts should not examine doctrinal matters.