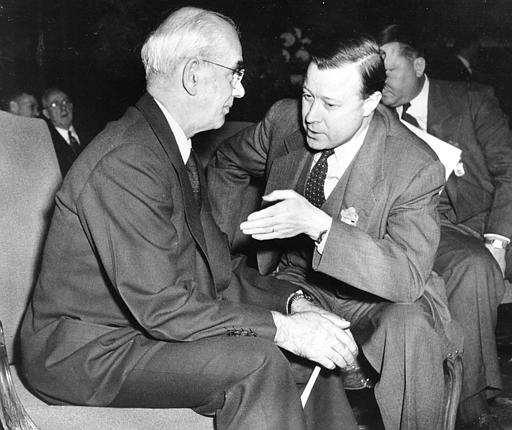 Philip Murray, left, president of the Congress of Industrial Organizations (CIO), confers with Walter Reuther, president of the United Auto Workers, as the CIO National Convention opens in Chicago, Ill., Nov. 20, 1950. The issue of whether the unions could be criminally indicted and prosecuted for violating the campaign finance laws that prohibited labor expenditures in federal election campaigns arose in Michigan and was addressed by the Supreme Court in a 1957 ruling. The Court in United States v. Auto Workers overturned a district court's dismissal of indictment, allowing prosecution to proceed and clearing the way for a First Amendment-based challenge on the constitutionality of the law. However, on remand, the union was acquitted in a jury trial. (AP Photo, used with permission from The Associated Press.)

In United States v. Auto Workers, 352 U.S. 567 (1957), the Supreme Court held that the use of general union treasury funds to sponsor commercial television broadcasts touting 1954 congressional candidates was an indictable offense under 18 U.S.C. 610, which banned corporate or labor contributions or expenditures in federal campaigns.

In an appeal brought under the Criminal Appeals Act, the Court reversed the district court’s dismissal of the indictment for failure to state a statutory offense.

In Auto Workers, Justice Felix Frankfurter, writing for the Court, began by noting that at issue were both “the construction and, ultimately, the constitutionality” of the congressional statute.

In his opinion, Frankfurter focused on “construction,” concluding that the indictment described the very activity Congress meant to ban as “expenditures.” In support, Frankfurter recited at length the history of federal campaign finance regulation, from the enactment of the Tillman Act in 1907, which banned corporations from expending money to influence federal elections, through the first extension of the corrupt practices laws in the Smith-Connally Act, which barred unions from doing the same, to passage of the Taft-Hartley Act in 1947.

Frankfurter noted that section 304 of Taft-Hartley was specifically intended to prohibit union expenditures in federal elections. Accordingly, the Court reversed the lower court’s dismissal. In so doing, it cleared the way for the prosecution to proceed and, significantly, for a constitutional, First Amendment-based challenge to be raised in defense as the facts were developed. On remand, the union was acquitted after a jury trial.

Disssent: 'Until today, political speech has never been considered a crime'

Douglas wrote, “The opinion of the Court places [union] advocacy in the setting of corrupt practices. The opinion generates an environment of evil-doing and points to the oppressions and misdeeds that have haunted elections in this country. Making a speech endorsing a candidate for office does not, however, deserve to be identified with anti-social conduct. Until today, political speech has never been considered a crime.”