By David L. Hudson Jr.
Other articles in Issues Related to Speech, Press, Assembly, or Petition, Freedom of the Press issues and topics 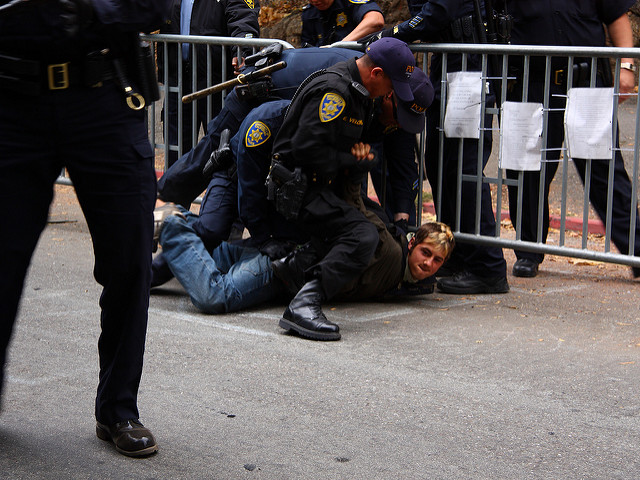 Federal appellate courts have ruled consistently that citizens have a right to record police. The 1st U.S. Circuit Court of Appeals said “(g)athering information about government officials in a form that can readily be disseminated to others serves a cardinal First Amendment interest in protecting and promoting the free discussion of governmental affairs.” (Photo of a man getting arrested by Flickr user A Gude taken Sept. 9, 2008, in Alameda, California.)

Filming police officers as they perform their official duties in public has become an emerging First Amendment issue.

Many cases have arisen where citizens face a range of criminal charges after attempting to videotape a traffic stop, arrest or other police activity. The issue resonates deeply in the American consciousness, particularly as videos have gone viral of police shootings of citizens.

Courts have recognized a First Amendment right to film police

Several recent court decisions have recognized a First Amendment right to film and record police-citizen interactions. A primary example is Glik v. Cunniffe, 655 F.3d 78 (1st Cir. 2011). Simon Glik was arrested by police after he attempted to record officers' interaction with a young Black male on the Boston Commons. After the charges were dismissed, Glik sued, alleging a violation of his First Amendment rights.

The 1st U.S. Circuit Court of Appeals held that Glik had a clearly established right to film police officers in public. The appeals court explained: “Gathering information about government officials in a form that can readily be disseminated to others serves a cardinal First Amendment interest in protecting and promoting the free discussion of governmental affairs.”  The 1st Circuit said the act of filming police officers was part and parcel of a corollary First Amendment principle — that the public has a right to receive information and ideas.

The ACLU of Illinois filed a challenge, seeking an injunction against the government enforcing a wiretapping law that would prohibit the recording of police officers in their official duties. The ACLU contended that the First Amendment protected the right to film and record. The appeals court agreed, explaining that “[c]riminalizing all nonconsensual audio recording necessarily limits the information that might later be published or broadcast — whether to the general public or to a single family member or friend — and thus burdens First Amendment rights.”

While most courts have recognized the First Amendment right to record or film the police, there remains the difficult issue of qualified immunity, a doctrine that protects government officials from liability unless they have violated clearly established constitutional rights.

The issue in many lawsuits revolves around whether a federal court will recognize that the right was clearly established at the time of the citizen recording or filming.

In 2020, an 11th Circuit panel denied qualified immunity to an Atlanta police officer who arrested a protester on a disorderly conduct charge because the protester was filming police.

Another issue that has not been fully fleshed out by the courts concerns the relationship between the right to record and various privacy laws. (Kaminski, 167-68).