By John R. Vile
Related cases in Charitable Solicitations and Freedom of Speech 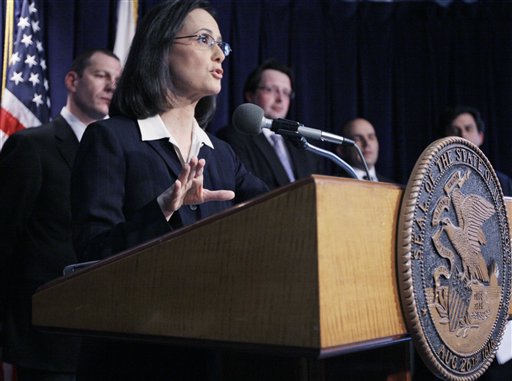 Illinois Attorney General Lisa Madigan speaks in 2008. Madigan was involved in Illinois ex rel. Madigan v. Telemarketing Associates, Inc. (2003) for pursuing fraud charges against telemarketers who misrepresented the amount of money they were giving to a charitable cause. The Court ruled that pursuing the charges did not violate the First Amendment free speech clause. (AP Photo/M. Spencer Green, used with permission from the Associated Press.)

In Illinois ex rel. Madigan v. Telemarketing Associates, Inc., 538 U.S. 600 (2003), the Supreme Court ruled that state efforts to pursue fraud charges against fundraisers and telemarketers for misrepresenting monies collected in fundraising campaigns did not violate the free speech clause of the First Amendment.

The Illinois Supreme Court had ruled that Schaumburg v. Citizens for a Better Environment (1980), Secretary of State of Maryland v. Joseph H. Munson Co., Inc. (1984), and Riley v. National Federation of the Blind (1988) had barred such charges, but the U.S. Supreme Court decided differently in a unanimous decision, with Justice Ruth Bader Ginsburg delivering the opinion of the Court.

Acknowledging that prior decisions had determined that a state could not set a specific percentage on monies collected in fundraising campaigns to be allocated to affected charities, Ginsburg observed that, “when nondisclosure is accompanied by intentionally misleading statements designed to deceive the listener, the First Amendment leaves room for a fraud claim.” Ginsburg recognized that states had a substantial interest in preventing fraud in charitable solicitations.

She further ruled that, “So long as the emphasis is on what the fundraisers misleadingly convey, and not on percentage limitations on solicitors’ fees per se, such actions need not impermissibly chill protected speech.” The actions at issue did not constitute a prior restraint but targeted fraudulent representations.

Justice Antonin Scalia wrote a concurring opinion, joined by Justice Clarence Thomas, which also focused on the “‘solid core’ of misrepresentations ... that go well beyond mere commitment of the collected funds to the charitable purpose.”