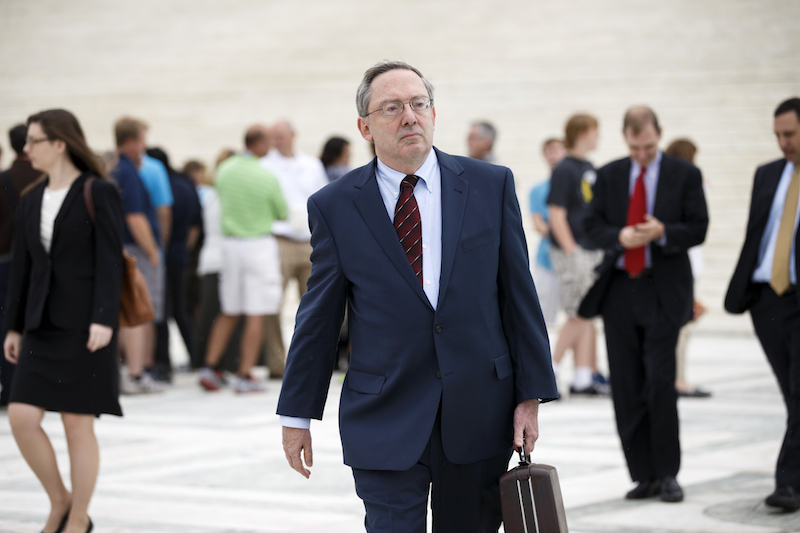 Douglas Laycock is one of the nation’s foremost religious liberty experts. In this 2014 photo, Laycock leaves after arguing before the Supreme Court on behalf of an Arkansas prison inmate who says his Muslim beliefs that require him to grow a beard are being violated by prison rules that prevent beards. (AP Photo/J. Scott Applewhite, used with permission from The Associated Press)

Douglas Laycock (1948- ) is one of the nation’s foremost religious liberty experts and a law professor at the University of Virginia.

Laycock is not only one of the nation’s foremost academics, but he also argues religious liberty cases before the United States Supreme Court. He is known for protecting religious liberty principles from both sides of the culture war. He has advocated for same-sex couples and conservative Christians. He also has argued both free exercise and establishment clause cases before the Supreme Court.

Laycock has argued First Amendment cases before the Supreme Court

In Holt, the Court unanimously ruled that Arkansas prison officials violated the religious liberty rights of an inmate under the Religious Land Use and Institutionalized Persons Act by prohibiting him from wearing a short beard.

In Hosanna-Tabor, the Court unanimously ruled that the ministerial exception prevented a court from examining whether a church’s school discriminated against a former teacher.

In Lukumi, the Court ruled that a Florida city violated the free exercise clause rights of a church when it targeted the church’s animal sacrifice practices.