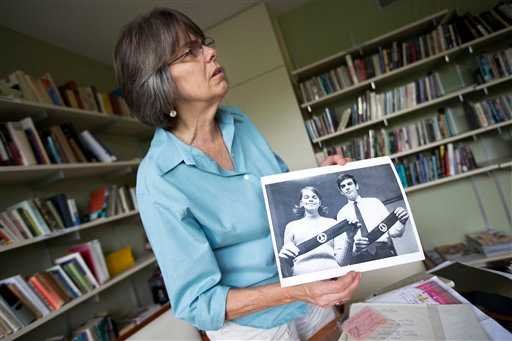 The substantial disruption test was developed in the seminal student speech decision Tinker v. Des Moines Independent Community School District (1969) to determine when public school officials may discipline students for their expression. It remains the leading test used in student-speech cases. In this 2013 photo, Mary Beth Tinker shows an old photograph of her with her brother John Tinker. Tinker was just 13 when she spoke out against the Vietnam War by wearing a black armband to her Iowa school in 1965. When the school suspended her, she took her free speech case all the way to the U.S. Supreme Court and won. (AP Photo/Manuel Balce Ceneta, used with permission from the Associated Press)

The Tinker case involved public school students in Iowa who wore black peace armbands to protest U.S. involvement in the Vietnam War, to support Robert Kennedy’s Christmas truce, and to mourn those who had died. School officials suspended the students under a hastily enacted no-black armband policy. They challenged their suspension in court.

Though the students lost in the lower courts, the U.S. Supreme Court reversed and ruled in favor of the students.   The Court wrote: “Certainly where there is no finding and no showing that engaging in the forbidden conduct would materially and substantially interfere with the requirements of appropriate discipline in the operation of the school," the prohibition cannot be sustained.  The Court concluded that wearing the armbands did not cause any significant disruptions at the schools.

The U.S. Supreme Court actually adopted the test from the 5th U.S. Circuit Court of Appeals in Burnside v. Byars (1966). In that case, the 5th Circuit ruled that public school officials violated the free-speech rights of several African-American female students who wore “Freedom Buttons” to school to protest voting discrimination.   The 5th Circuit explained that school officials cannot punish students for the exercise of their First Amendment rights “where the exercise of such rights in the school buildings and schoolrooms do not materially and substantially interfere with the requirements of appropriate discipline in the operation of the school.”

In Tinker, the Court also explained that public school officials must be able to point to evidence of disruption rather than rely on an “undifferentiated fear or apprehension of disturbance.”

The lower courts have emphasized public school officials to do not have to wait for an actual riot.  The modern iteration of the test is a “reasonable forecast of substantial disruption.”    For example, the 6th U.S. Circuit Court of Appeals a few years after Tinker used the substantial disruption test in Melton v. Young (1972) to rule that public school officials in Chattanooga, Tennessee, did not violate the free-speech rights of a student when they prohibited him from wearing a Confederate flag jacket to his school.

Much more recently, the 5th Circuit used the substantial disruption test in Bell v. Itawamba County School Board (2015), ruling that public school officials had a right to punish a student who posted online a rap video criticizing two teachers.   The appeals court explained that the Tinker substantial disruption test still applied even though the student had created the speech entirely off-campus because his off-campus speech had a tangible impact on the school environment.

In 2021, the U.S. Supreme Court used the substantial disruption test in Mahanoy Area School District v. B. L. to rule that school officials could not discipline a cheerleader for a vulgar Snapchat post she made while off campus.  Justice Stephen Breyer reasoned a school's regulatory interests were lessened when a student engages in off-campus social media speech, laying out three features of social media speech that dictated such an approach.