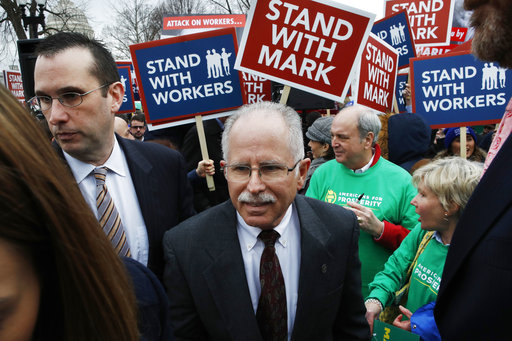 Illinois government employee Mark Janus, center, turns after thanking supporters outside the Supreme Court, Monday, Feb. 26, 2018. The Supreme Court ruled in June 2018 that an Illinois law that allows unions representing government employees to collect fees from workers who choose not to join is impermissible under the First Amendment as a form of compelled speech. (AP Photo/Jacquelyn Martin, reprinted with permission from The Associated Press.)

In this decision, the U.S. Supreme Court ruled 5-4 that an Illinois law requiring non-union members to pay agency fees for the union to engage in collective bargaining and related activities amounts to an unconstitutional compulsion of speech in violation of the First Amendment.  The Court overruled its decision in Abood v. Detroit Bd. of Educ. (1977), which had upheld a similar agency shop arrangement.

The Illinois Public Labor Relations Act allows state employees to unionize.  When they unionize, individual employees don’t have to join the union but that union becomes their sole permitted representative and they have to pay a percentage of the union dues – called an agency fee.

Under the rationale of Abood, non-union member employees must pay chargeable expenditures – those that are germane to the union’s collective bargaining responsibilities but don’t have to fund political and ideological efforts of the union.

Mark Janus, an employee of the Illinois Department of Healthcare and Family Services, initially intervened in a lawsuit filed by the state’s governor, challenging the agency-fee arrangement.  Janus contended that forcing him to pay union fees amounted to compelled speech in violation of the First Amendment.  Both a federal district court and the 7th U.S. Circuit Court of Appeals disagreed based on the Abood ruling.

However, the U.S. Supreme Court reversed in a majority opinion authored by Justice Samuel A. Alito, Jr. who viewed the agency fee arrangements as pure compulsion of speech.  “Compelling individuals to mouth support for views they find objectionable violates that cardinal constitutional command, and in most contexts, any such effort would be universally condemned,” he wrote. “Because the compelled subsidization of private speech seriously impinges on First Amendment rights, it cannot be casually allowed.”

Instead, he said that the Illinois law violated either strict scrutiny or a form of “exacting scrutiny” used in cases such as Knox v. Service Employees (2012) and Harris v. Quinn (2014).   Alito recognized that achieved labor peace is a compelling government interest, but that such can be achieved in ways that are significantly less restrictive of First Amendment freedoms.   Alito noted that federal law does not permit agency fees and many states have laws that don’t allow agency fees – but they still achieve labor peace.

Alito rejected the government’s arguments that the agency fees were justified as a form of employee speech under Garcetti v. Ceballos (2006) or Pickering v. Board of Education (1968).   He reasoned that Garcetti – which rejects employee First Amendment protections for official, job-duty speech – does not apply because when an employee speaks through a union, he is not speaking for the employer.

He also determined that the Pickering line of cases are not a good fit in this context, because Pickering involves an individual employee’s speech and whether it interferes with the employer’s operation not what happens when the government compels or subsidizes speech in support of third parties.

Alito then explained why the principle of stare decisis should not save Abood, writing that the decision had lost its factual and legal underpinnings.  He described Abood as an “anomaly in our First Amendment jurisprudence.”

Justice Elena Kagan authored an opinion for the four dissenters, reasoning that Abood struck a reasonable balance between public employees First Amendment rights and government’s workplace operational interests.   She noted that “basic economic theory shows why a government would think that agency fees are necessary for exclusive representation to work.”

She opined that the majority had continued a pattern of using the First Amendment in an “aggressive manner” to invalidate “workaday economic and regulatory policy.”