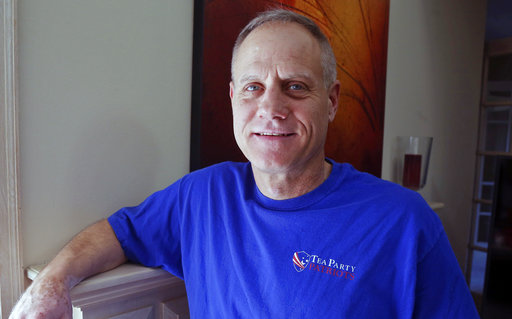 In this Feb. 16, 2018, photo, Andy Cilek poses with a Tea Party shirt at his home in Eden Prairie, Minn. Cilek was one of two voters who defied elections officials after he was asked to cover up a tea-party shirt and button. The Supreme Court has struck down a Minnesota law that restricted what voters can wear to polls. The justices ruled June 14, that the law violates the First Amendment. Still, the justices’ 7-2 ruling suggested that some restrictions on what people can wear to vote are permissible. (AP Photo/Jim Mone, File, with permission from The Associated Press.)

In Minnesota Voters Alliance v. Mansky (2018), the U.S. Supreme Court ruled 7-2 that part of a Minnesota law prohibiting the wearing of political apparel at polling places violates the First Amendment. The Court majority reasoned that the reach of the law was not reasonable even though states had strong interests in protecting voters at the polls.

Minnesota voters could not wear political apparel at the polls

The specific provision at issue — called the “political apparel ban” — provides that “a political badge, political button, or other political insignia may not be worn at or about the polling place.” Minnesota Voters Alliance (MVA), a nonprofit organization that seeks election reforms, and a few registered voters challenged the provision on its face and as applied. The plaintiffs were told they could not wear shirts containing the following messages at the polls: “Please I.D. Me”, “Don’t Tread on Me” with a Tea Party logo, and another Tea Party shirt.

The state argued that its provision was supported by the Court’s decision in Burson v. Freeman (1992), upholding a Tennessee law that prohibited the display of campaign materials within 100 feet of polling places.

MVA and the other plaintiffs petitioned for review by the U.S. Supreme Court. Granting the writ, the Court determined that the law had First Amendment problems. Writing for the majority, Chief Justice John G. Roberts, Jr. first acknowledged that the polling place is a nonpublic forum, a place in which a state can make content-based distinctions on speech so long as the restrictions are viewpoint-neutral and reasonable.

Roberts reasoned that the “political apparel ban” was viewpoint neutral and, thus, the question boiled down to whether the provision was reasonable. Roberts wrote that the law was not reasonable, in part because the provision failed to define the term “political” and too much confusion existed as to what types of political apparel were allowable and which were proscribable.

The state had issued materials that said that impermissible political insignia included “issue oriented material designed to influence or impact voting.”  To Roberts, this created problems under the First Amendment. “Would a ‘Support Our Troops’ shirt be banned, if one of the candidates or parties had expressed a view on military funding or aid for veterans?,” Roberts asked. “What about a #MeToo shirt, referencing the movement to increase awareness of sexual harassment and assault?”

“A rule whose fair enforcement requires an election judge to maintain a mental index of the platforms and positions of every candidate and party on the ballot is not reasonable,” he wrote.

Roberts also questioned the state’s written materials saying that the “political apparel ban” applied to any item “promoting a group with recognizable political views.” Roberts wrote that there was too much uncertainty as to what groups would be covered by this interpretation.

Those election judges at the polls should have some discretion, but “that discretion must be guided by objective, workable standards.”

Roberts concluded that “if a State wishes to set its polling places apart as areas free of partisan discord, it must employ a more discernable approach than the one Minnesota has offered here.”

Dissenters thought the state court should have decided it

Justice Sonia Sotomayor authored a dissenting opinion, joined by Justice Stephen Breyer. She contended that the Court should have certified the case to the Minnesota Supreme Court to provide guidance as the meaning and reach of the “political apparel ban.”  She concluded that “the Court should be wary of invalidating a law without giving the State’s highest court an opportunity to pass on it.”