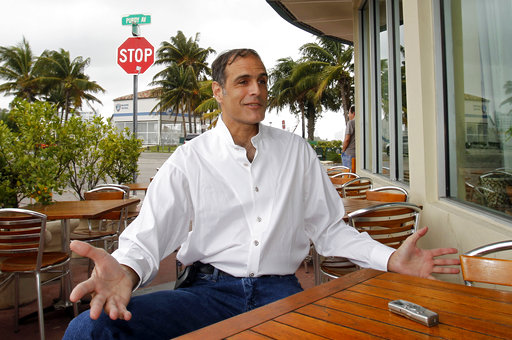 In this 2012 file photo, Fane Lozman is seen in Miami Beach, Florida. Lozman sued the city of Riviera Beach claiming that city officials retaliated against him when he was arrested and stopped from speaking during the public comments section of a city council meeting. Lower courts ruled against him, saying he had to prove that police did not have probable cause for the arrest before proceeding with his claim. But the Supreme Court overturned the ruling in June 2018, saying that a plaintiff could proceed with a retaliation lawsuit even if there was probable cause for arrest. (AP Photo/Alan Diaz, File, reprinted with permission from the Associated Press)

In the decision of Lozman v. Riviera Beach, Florida, 585 US ___ (2018), the U.S. Supreme Court ruled 8-1 that a plaintiff alleging that a government entity arrested him or her as part of an overall pattern of retaliation against the plaintiff can proceed with a retaliation lawsuit even if there was probable cause for an arrest.

Fane Lozman was a frequent critic of city officials in Riviera Beach, Florida, for their policies on eminent domain. Lozman became a resident of the city after he docked his floating home on city waterfront property. Lozman filed a lawsuit against the city for violating an open meetings law when city officials met with developers behind closed doors.

In November 2006, Lozman went to a city council meeting and spoke during the public comment period. He began to criticize the recent arrest of a former county official when a councilmember ordered him to stop uttering those remarks. After Lozman continued, the councilmember ordered a police officer to arrest Lozman.

The officer arrested Lozman when he refused to quit talking and leave the podium. The officer handcuffed Lozman and escorted him from the building. Lozman contended that the city retaliated against him by arresting him for his open-meetings lawsuit against the city and prior public criticisms of city officials.

Lozman was arrested for disorderly conduct. A prosecutor later dropped the charges. Even still, Lozman filed a section 1983 civil rights lawsuit, alleging retaliation. The city countered that the retaliation lawsuit should fail because there was probable cause to arrest Lozman.

A federal district court determined that to prevail, Lozman would have to show that the arresting officer was motived by animus against Lozman and that the officer lacked probable cause for the arrest. A jury ruled for the city.

On appeal, the 11th U.S. Circuit Court of Appeals determined that the city erred when it reasoned that the officer himself must harbor a retaliatory animus but determined any such error harmless because the jury determined the arrest was backed by probable cause.

Lozman appealed to the U.S. Supreme Court, arguing that probable cause is not a bar to a retaliatory arrest claim. Lozman urged the Court to adopt the rule from Mt. Healthy v. Doyle (1977), a decision in which the Court allowed a public employee’s First Amendment lawsuit to proceed when the government reason for punishing the employee was a motivating or substantial factor. As applied to a retaliation claim, Lozman argued that a retaliation plaintiff must show that the retaliation was a motivating or substantial factor and a defendant can prevail only by showing that it would have made the same decision to arrest without respect to retaliation.

The city countered that, pursuant to the Court’s decision in Hartman v. Moore (2006), probable cause for arrest is an absolute bar just as the Court determined it was in Hartman for retaliatory prosecution cases.

Writing for the majority, Justice Anthony Kennedy reasoned that probable cause should not be a bar for those retaliation cases in which the plaintiff alleges that a governmental entity engaged in a pattern of retaliation against a plaintiff for protected speech or petitioning.

“The fact that Lozman must prove the existence and enforcement of an official policy motivated by retaliation separates Lozman’s claim from the typical retaliatory arrest claim,” Kennedy wrote.

Kennedy wrote that “there is a risk that some police officers may exploit the arrest power as a means of suppressing speech.”

Kennedy concluded that “Lozman need not prove the absence of probable cause to maintain a claim of retaliatory arrest against the City.”  Instead, “the Mt. Healthy test provides the correct standard for assessing a retaliatory arrest claim.”

Kennedy also recognized that Lozman’s petition rights were implicated, writing that Lozman claimed he faced retaliation after he filed a lawsuit. “Lozman’s speech is high in the hierarchy of First Amendment values,” he added.

Justice Clarence Thomas filed a solitary dissent. “Instead of dreaming up our own rule, I would have answered the question presented and held that plaintiffs must plead and prove a lack of probable cause as an element of a First Amendment retaliatory arrest claim,” he wrote.