By David Hudson
Other articles in Legal Terms and Concepts Related to Speech, Press, Assembly, or Petition 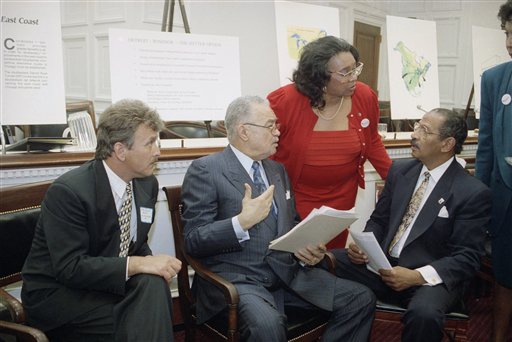 Barbara Rose-Collins, shown here in May, 1993, while a U.S. Congresswoman representing a district in Detroit, sued the Detroit Free Press after it quoted her saying that she "hated" the white race. In reality, the tape-recorded interview showed she said, "I don't like the race." Applying the substantial truth doctrine in defamation law, the Michigan Court of Appeals held that the two statements were close enough to defeat the claim of libel.

The substantial truth doctrine is an important defense in defamation law that allows individuals to avoid liability if the gist of their statement was true.

Defamation is a false statement of fact that harms another’s reputation.  It is rooted in the idea that people have a right to their good name and reputation.  To constitute defamation, the statement or statements must be false.  In other words, falsity generally is a required element of a defamation claim.

Courts examine statements as a whole in determining truth

Sometimes, individuals make mistakes or do not utter 100% truths.  The law does not equate every factual inaccuracy as a false statement.  To require literal truth of every statement would lead to too much self-censorship and a flood of defamation lawsuits.   This led to the adoption of the so-called substantial truth doctrine, which has roots in both common law equity and the First Amendment freedom of the press.

The application of the doctrine is considered a question of law and, thus, can be used successfully to ward off defamation suits.

For example, a Detroit newspaper said that an African-American political candidate said “I hate the race” when referring to Caucasians. In actuality, the politician had said, “I don’t like the race.”  The Michigan Court of Appeals held in Collins v. Detroit Free Press (Mich. Ct. App. 2001) that those two statements were close enough to merit application of the substantial truth doctrine.

The U.S. Supreme Court addressed the substantial truth doctrine in passing in Masson v. New Yorker Magazine (1991), a case focused on whether a reporter’s alleged alteration of a subject’s quotes amounted to actual malice in defamation law.   The Court explained that the common law of libel “overlooks minor inaccuracies and focuses upon substantial truth.”

The Court further explained that substantial truth essentially means that a statement is not false if the substance, the gist or sting of the statement is true.

Would the literally true statement have a different effect on the listener?

The primary inquiry in considering the defense of substantial truth is whether the allegedly libelous statement as published would have a different effect on the mind of the reader from that of a truthful statement.

The Reporters Committee for Freedom of the Press explains: “A statement is substantially true if, even if not literally true, it does not create an impression in the mind of the listener more damaging than a literally true statement would.”

Scholar Meiring de Villiers lauds the substantial truth doctrine, writing that it “promotes of the First Amendment by reducing the risk of self-censorship, yet preserves defamation law’s reputational protection and compensatory function.” (123).