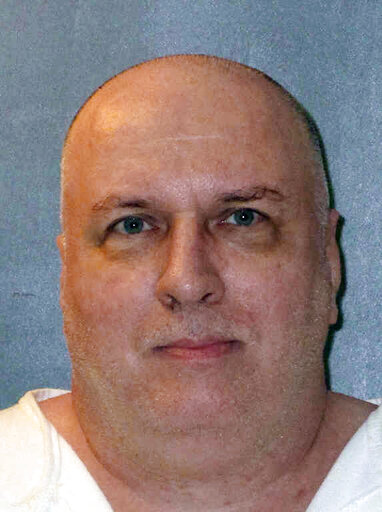 This undated photo provided by the Texas Department of Criminal Justice shows Patrick Murphy. Texas death row inmate Patrick Murphy came to the Supreme Court asking to halt his execution because the state wouldn't let his spiritual adviser accompany him into the execution chamber, even as other inmates of different faiths get that ability. The Supreme Court in Murphy v. Collier found that the state's rules amounted to 'denomination discrimination' and granted a stay. (Texas Department of Criminal Justice via AP, with permission from The Associated Press.)

In Murphy v. Collier (2019), the U.S. Supreme Court granted a stay of execution to Texas inmate Patrick Henry Murphy, who was convicted and sentenced to death for his role in killing an Irving, police officer after a prison escape.

Court grants stay of execution based on religious discrimination

In November 2018, the state of Texas had set his execution date for March 28, 2019.  However, a few days prior, Murphy’s attorneys filed a claim in federal district court, alleging that the execution could not proceed because Texas prison officials refused to allow Murphy to have his Buddhist spiritual advisor in the execution room with him.

Texas policy allowed Christian or Muslim inmates to have their spiritual advisors but not persons of other religions.  Murphy contended that this violated the Establishment Clause and the Religious Land Use and Institutionalized Persons Act (RLUIPA).

Both a federal district court and a federal appeals court denied Murphy’s claims.  However, the U.S. Supreme Court granted a stay of execution.

Justice Brett Kavanaugh wrote an opinion, concurring in the grant of application for stay of the execution.   Justice Samuel A. Alito, Jr. wrote a dissenting opinion, joined by Justices Clarence Thomas and Neil Gorsuch.

In his opinion, Justice Kavanaugh explained that Texas’ allowance of Christian or Muslim inmates to have their spiritual advisors present in the execution room but not Buddhist inmates represented what he called “denominational discrimination.”

“What the State may not do, in my view, is allow Christian or Muslim inmates but not Buddhist inmates to have a religious advisor for their religion in the execution room,” he wrote.

Alito acknowledged that Murphy raised important issues under the First Amendment and RLUIPA, though he said that such claims need to be carefully evaluated, because prisoners have a reduced level of First Amendment rights under the Court’s decision in Turner v. Safley (1987).   He wrote that “Turner presents a serious obstacle.”

Alito concluded that “[p]risoners should bring such claims well before their scheduled executions so that the courts can adjudicate them in the way that the claims require and deserve and so that States are afforded sufficient time to make any necessary modifications to their execution protocols.”