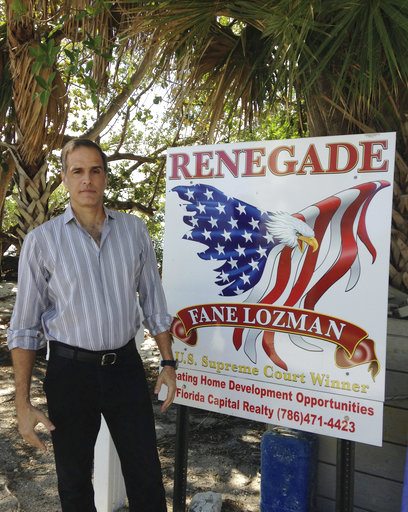 Fane Lozman was a frequent critic of city officials in Riviera Beach, Florida, especially after they seized his floating home and destroyed it. In November 2016, he went to a city council meeting to speak during the public comments. He became critical and after being asked to stop, and not stopping, his arrest was ordered. He argued he was arrested in retaliation for his viewpoints, and the Supreme Court allowed his claim to proceed, saying probable cause for arrest was not a complete bar for such a claim. In this photo from 2017, Lozman stands on his property in Riviera Beach, Fla (AP Photo/Curt Anderson, used with permission from the Associated Press)

However, the Court created an exception for those cases in which the arrested individual can show that he or she was treated differently than a group of similarly situated individuals who did not engage in the same protected expression. Such a situation would tend to prove that perhaps the government official indeed arrested the person in retaliation for his or her protected speech.

The Supreme Court created another exception in Lozman v. Riviera Beach, Florida (2018). If a plaintiff can show that a government official arrested him or her as part of an overall pattern or plan of retaliation, then the plaintiff also can proceed with a First Amendment retaliatory arrest lawsuit.

Though difficult to prove, retaliatory arrest claims are important because the government should not be able to chill expression and avoid legal consequences when the government arrests someone in retaliation for his or her protected expression.