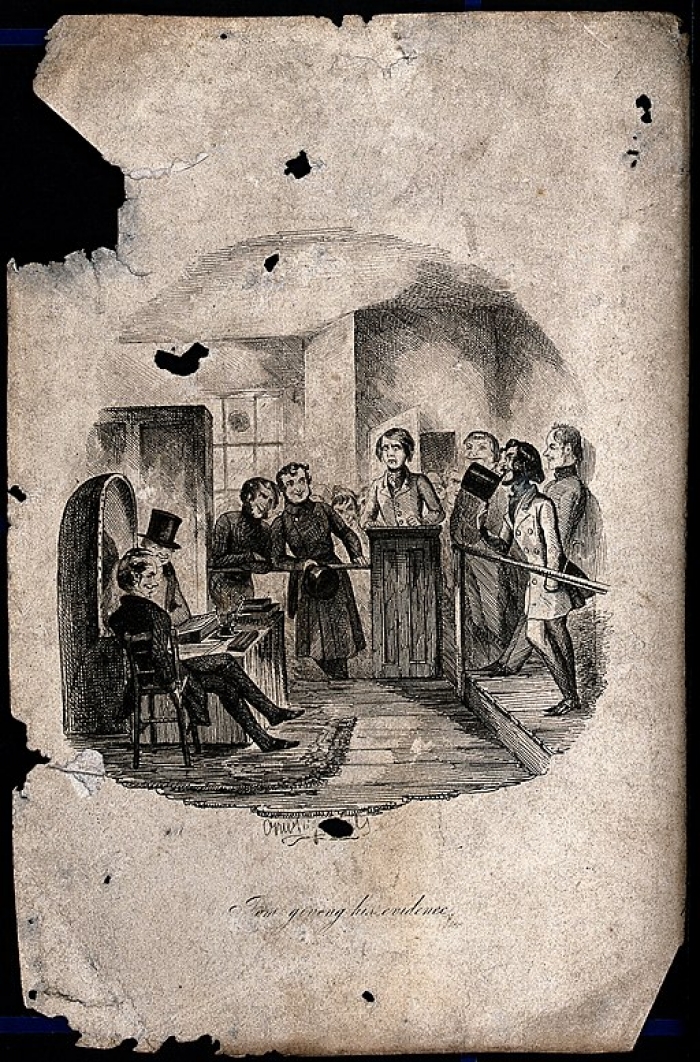 This photoengraving entitled "Tom giving his evidence" depicts a young man in a witness box with policemen around him, presumably during a court trial. A prominent idea that persisted well into the 1800s was that witnesses in court trials could only testify if they believed in God or in a system of rewards or punishment in the afterlife. The idea was upheld in state court rulings as the First Amendment had yet to be applied to the states. (The illustration is from the Wellcome Collection, CC BY-4.0)

Although Article VI of the U.S. Constitution prohibits any religious test “as a Qualification to any Office or public Trust under the United States,” and the First Amendment prohibits Congress from adopting laws “respecting the establishment of religion, or prohibiting the free exercise thereof,” none of these provisions initially applied to the states.

Remnants of state religious establishments remained through 1833, and, even thereafter, common law often embodied practices that arguably favored adherents to certain religious beliefs over others.

Many thought that belief in God, afterlife was needed to ensure truthful court testimony

Nowhere was this clearer than in 19th-century court decisions and legislative disputes over the qualifications for witnesses in trial proceedings. One prominent idea during this time period, which is reflected in speeches by prominent statesmen, including some who were not known for their orthodox Christianity, was the idea that a belief in God and/or in future rewards or punishments, was an essential safeguard both as a way of protecting republican government in general and of guaranteeing the truthfulness of the testimony of courtroom witnesses in particular.

When individuals took an oath to tell the truth, such individuals were effectively recognizing that God would judge them if they lied. Although initially designed primarily to weed out atheists without fear of God, in time, the so-called “future state doctrine” was also used to exclude Universalists, who believed that God would ultimately save all men, from testifying. Rulings, however, varied significantly from one state and jurisdiction to another.

In 1807, the Tennessee State Court thus ruled in State v. Cooper, 2 Tenn. 96, that “No person can be a witness who does not believe in a future state of rewards and punishments; but evidence of a settled belief, not slight or casual sayings, should be produced.” A Connecticut court issued a similar ruling in Curtiss v. Strong, 4 Day 51 (1809).

In a more widely known case over which Supreme Court Justice Joseph Story (who believed that Christianity was embodied in the common law) presided, a federal court in Rhode Island in Wakefield v. Ross, 5 Mason 16; Fed. Cas. 17,050 (1827), disqualified the testimony of a father and son who were variously reported as disbelieving in God and/or in future rewards and punishment.

In an excellent study that reviews these and other cases, Ronald P. Formisano and Stephen Pickering concluded that “Religious tests for witnesses, though diminishing in frequency, persisted well through the nineteenth century” (2009, 232).

In time, groups of nonbelievers, freethinkers, Universalists, and members of churches that traditionally advocated separation of church and state, began increasingly to challenge these laws and judicial rulings, and to push for legislative relief. They argued that moral character and familiarity with relevant facts should be adequate grounds for testimony, whether a witness believed in God or the afterlife or not. Although most such challenges were fairly episodic, Formisano and Pickering report that in time, “in different regions and states judges gradually moved towards acceptance of various religious beliefs and more lenient tests regarding divine judgment for perjury, atheism excepted.” (2009, 246).

Given the application of the First Amendment to the states, it seems unlikely that even a law only excluding professed atheists from testifying would survive current judicial scrutiny.

John Vile is a professor of political science and dean of the Honors College at Middle Tennessee State University. He is co-editor of the Encyclopedia of the First Amendment. This article was published Nov. 21, 2019.