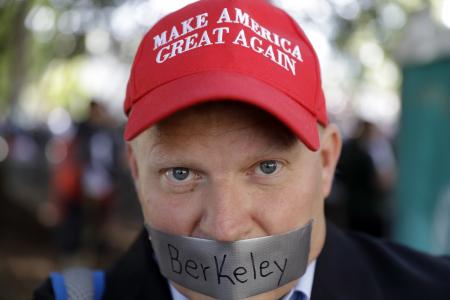 After a threat of violence led to the University of California at Berkeley to cancel a speech by conservative writer Ann Coulter, demonstrations took place - amid strong police presence - to show support for free speech, as well as to condemn the views of Coulter and her supporters. Here, Daryl Tempesta tapes a sign over his mouth in protest during the demonstration in April 2017. (AP Photo/Marcio Jose Sanchez)

Academic freedom refers to the ability of teachers, students, and educational institutions to pursue knowledge without unreasonable political or government interference.

Included within this concept is protecting the right of universities and colleges to engage in all aspects of intellectual activity and a faculty’s autonomy in deciding what and how to teach and what research to conduct and publish. It seeks to promote the free exchange of ideas, scholarly debates, and the search for knowledge.

In contrast, institutional academic freedom safeguards the university as a whole from government or other outside interference. It permits the university to select its faculty and to determine areas of study, appropriate teaching methods, and which students to admit.

Development of academic freedom in U.S. began after Civil War

Although the concept of freedom of thought and expression has ancient roots — Socrates asserted it — the claim of academic freedom is more recent in origin, having come to be recognized in Western Europe in the sixteenth and seventeenth centuries. It is sometimes connected with the founding of Leiden University in 1575 and the rise of social and economic liberalism.

Academic freedom developed within the United States as protection for individual teachers. After the Civil War, the goal of higher education shifted from training students for the clergy and elite professions, such as medicine, to training students for practical jobs, such as those in government and business. As a result of this shift, professors sought control over their research and curriculum. They desired to divorce themselves from the governance of academic trustees and administrators that marked pre–Civil War education.

To accomplish this, professors looked to the model of their German counterparts. In Germany, academic freedom, or Lehrfreiheit, stood for the idea that faculty have freedom to teach and control their research, and Lernfreiheit, the corresponding right of students to pursue their own course of study.

Before academic freedom had any legal significance, professors formed the American Association of University Professors (AAUP) and in 1915 set forth its General Declaration of Principles. The principles assert that higher education and professional autonomy require freedom for faculty in research, publication, and teaching and identify peer review and tenure as the devices for achieving these ideals. Peer review allows fellow professors to judge a faculty member’s competence as a teacher and a scholar, and tenure provides continued employment to those faculty members who have earned professional competence as judged by their peers.

By 1940, nearly all major American universities had joined the AAUP’s approach to academic freedom. The organization’s Statement of Principles on Academic Freedom and Tenure issued in 1940 reiterated its 1915 policy and endures to this day. Although the 1940 statement is not law, it has influenced court decisions, been incorporated into many faculty handbooks, and has the support of hundreds of professional associations. Thus, the 1940 statement of principles is often regarded as the norm of academic practice in the United States.

Sweezy v. New Hampshire (1957) stands as the first U.S. Supreme Court case to expound upon the concept of academic freedom though some earlier cases mention it. In Sweezy, the Court reversed the conviction of a Marxist economist for refusing to answer questions by the attorney general concerning the political content of a lecture he delivered at the University of New Hampshire.

The plurality acknowledged the freedom of teachers and students, but Justice Felix Frankfurter, a former Harvard Law School professor, authored a concurrence that went further. He said that academic freedom protects an institution’s First Amendment right to decide on academic grounds who may teach, what may be taught, how it shall be taught, and who may be admitted to study. Two decades later, the majority in Regents of the University of California v. Bakke (1978) cited the same language, noting that academic freedom is a “special concern of the First Amendment.”

The Court had for the first time passionately expressed the social importance of academic freedom in Keyishian v. Board of Regents (1967). This case involved faculty members who refused to sign loyalty certificates as part of a New York law intending to prevent state employment of subversive persons.

The Court insisted that the First Amendment does not tolerate such laws, though it invalidated the law as unconstitutionally vague rather than on First Amendment grounds.

The Court stated, ”Our Nation is deeply committed to safeguarding academic freedom, which is of transcendent value to all of us, and not merely to the teachers concerned. That freedom is therefore a special concern of the First Amendment.”

Ending with a quotation from a U.S. district court decision in United States v. Associated Press (1943), the Court observed, “The Nation’s future depends upon leaders trained through wide exposure to that robust exchange of ideas which discovers truth ‘out of a multitude of tongues, [rather] than through any kind of authoritative selection’.”

In addition, academic freedom often extends beyond the speech rights protected by the First Amendment to others, such as the right to determine the curriculum of the classroom. Institutional rules and regulations, individual contracts, faculty handbooks, collective bargaining agreements, and academic customs protect these broader concerns of academic freedom.

Most constitutional academic freedom issues today revolve around professors’ speech, students’ speech, faculty’s relations to government speech, and using affirmative action in student admissions. Examples of cases include instances where professors are disciplined for expressing their views in class or in scholarship and when a professor’s need for professional autonomy is weighed against the public employer’s legitimate concerns.

Other cases present such situations as when students are punished for verbal insults of other students based on their race. The Supreme Court applied academic freedom to university policymaking when in Grutter v. Bollinger (2003) it held as constitutional the University of Michigan’s use of race in the admissions process, largely justifying its decision on the ability of institutions of higher learning, cited in Bakke, to seek diverse student bodies.

In 2001 Students for Academic Freedom (SAF) was founded in response to an alleged liberal bias in U.S. colleges and universities. The stated goal of SAF “is to end the political abuse of the university and to restore integrity to the academic mission as a disinterested pursuit of knowledge.”

In furthering its agenda, SAF drafted the controversial Academic Bill of Rights, which calls for universities and colleges to implement neutrality in its teaching, research, and development of students. Among the key regulations it calls for are that hiring, firing, promoting, and granting tenure be on the basis of performance; that course content and reading in the social sciences and humanities reflect diverse viewpoints; that students be graded on their work and not their political beliefs; and that the selection of speakers and the allocation of funds for speakers promote academic freedom and intellectual balance.

Many scholars and professors believe that the Academic Bill of Rights is counterproductive to academic freedom itself. The AAUP shares this view and has spoken out against it, arguing that it attacks the very principles that academic freedom is designed to protect. Although the Academic Bill of Rights has been introduced in several state legislatures and the U.S. House of Representatives, to date no legislature has formally enacted it, and debates continue to rage over its virtues and shortcomings.

In 2021 and 2022, many state conservative legislatures began enacting legislation that would bar educators in K-12 public schools and in public universities from discussing so-called "divisive concepts" related to race. At least one of those laws, the Stop W.O.K.E. Act, was prevented from implementation by a federal judge who said it violated free speech protections of the First Amendment. Critics generally argue that limiting how race is discussed will chill discussion of controversial issues.

A number of high-profile incidents in recent years have called into question the adequacy of protections for free speech on college campuses.  These incidents have involved punishing students or faculty members for controversial speech, imposing free speech zone policies, enforcing speech code restrictions, and disinviting controversial speakers.  Other free speech advocates warn about the problems of safe spaces, trigger warnings, and micro-aggressions.

The problem of disinviting speakers appears particularly problematic for academic freedom in recent years. It raises the specter of the heckler’s veto.

There was a highly publicized incident at the University of Missouri in Columbia on Nov. 9, 2015 where an assistant professor of communication sought to exclude two student reporters from a public space on campus where they were trying to take pictures of African-Americans participating in a Black Lives Matter demonstration.

In February 2017, officials at the University of California at Berkeley canceled a presentation by Milo Yiannopoulos after riots broke out. The threat of similar violence led to the cancellation of a speech on the same campus by Conservative writer Ann Coulter.  After he was shouted down by protestors at Middlebury College, the location of a speech by Charles Murray was moved in March 2017, and a violent confrontation ensued.

Ted Gup, a journalism professor, has observed that there is a history, going back to the exclusion of suffragettes, of barring individuals from campuses in order to protect the feelings of minorities, but that such groups have ultimately been the beneficiaries of unfettered speech (2017).

This article by Emilie S. Kraft was published in 2009 and last updated in 2022 by Middle Tennessee State University staff.