So Help Me God

By John R. Vile (Updated April 3, 2020)
Other articles in Issues Related to Religion 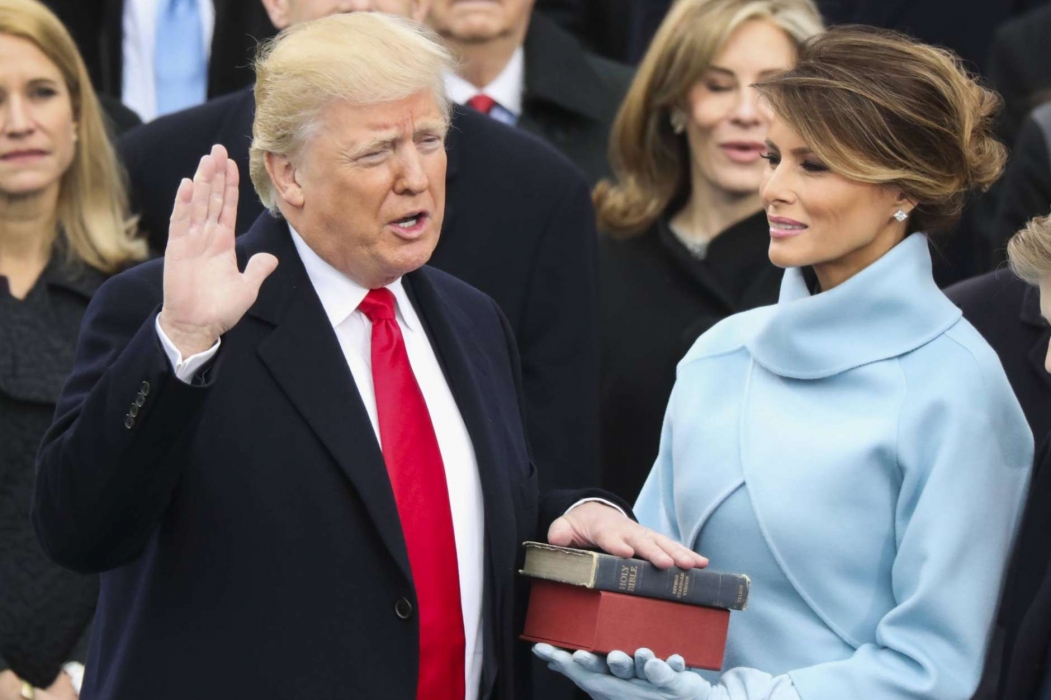 Scholars have debated the protocol of presidents repeating the words "so help me God" when they take their oath of office. A new comprehensive study on the subject concludes that the use is justified under the historical usage principle as well as the First Amendment free exercise rights. In this photo, President Donald J. Trump takes the oath of office at his inauguration in 2017. (AP Photo/Andrew Harnik, used with permission from the Associated Press)

On December 31, 2008, Michael A. Newdow, who had previously unsuccessfully challenged the constitutionality of the words “Under God” in the pledge of allegiance in Elk Grove Unified School District v. Newdow, 542 U.S. 1 (2004) filed a suit in Newdow v. Roberts, attempting to enjoin Chief Justice Roberts, or anyone else administering the oath to incoming President Barack Obama, from prompting the words (as Obama had requested) “so help me God” when he took his oath of office.

A U.S. District Court denied his request for a preliminary injunction, and the D.C. Circuit Court denied standing, although future Supreme Court Justice Brett Kavanaugh, who was then serving on the circuit court and who was primarily relying on the U.S. Supreme Court decision in Marsh v. Chambers, 463 U.S. 783  (1983), which permitted chaplains in state legislatures on the basis of long-standing historical practice, would have accepted the standing and would have rejected the injunction on its merits.

Scholars have First Amendment impact of "so help me God" phrase

Still scholars have continued to discuss the protocol surrounding these words, which are not listed within the Constitution and whether they violate the Establishment Clause of the First Amendment.

Much of the debate has centered on long-repeated claims, that a number of Supreme Court decisions have echoed, that George Washington had initiated the practice of adding the words “so help me God” to the presidential oath that the Constitution prescribed.  The best available evidence, however, suggests that reports that Washington used these words did not arise until long after he took the oath and cannot thus be reliably verified (Henriques 2009).

There is, however, contemporary evidence that George Washington engaged in a symbolic equivalent when he kissed the Bible after taking his oath, and that this practice was contemporaneously also reported for the inaugurations of Andrew Jackson, Abraham Lincoln, Ulysses S. Grant and, at times, through the presidency of Harry S Truman (Jonassen 2012, 898).  Moreover, a number of presidents beginning with Chester A. Arthur in 1881 used the words “so help me God” as have all presidents from Franklin D. Roosevelt through Donald J. Trump. (Jonassen 2012, 898).

Scholar has concluded that practice is probably justified

In a comprehensive study of the subject, law professor Frederick B. Jonassen, of Barry University, has concluded that the practice is probably justified not only under the historical usage principle articulated in the case of Marsh v. Chambers as well as the free exercise rights of individuals choosing to add these words to the oath.  He also argues that the practice passes the three prongs of the Lemon Test and other contemporary tests that the U.S. Supreme Court has used in contemporary cases involving the establishment clause of the First Amendment.

Although individuals testifying before Congress have typically ended their pledge to tell the truth with “So help me God,” House Democrats eliminated the use of this phrase when they regained power in the House of Representatives in 2019.  Representative Steve Cohen from Tennessee observed that “I think God belongs in religious institutions: in temple, in church, in cathedral, in mosque—but not in Congress.”  He claimed that this was a way of “using” God while adding “And God doesn’t want to be used” (Edmondson, 2019).

John Vile is a professor of political science and dean of the Honors College at Middle Tennessee State University. He is co-editor of the Encyclopedia of the First Amendment. This article was originally published on Dec. 20, 2019 and was last updated on April 3, 2020.