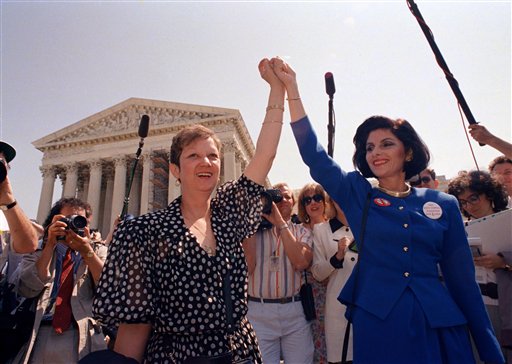 In this 1989 photo, Norma McCorvey, Jane Roe in the 1973 court case Roe v. Wade, left, and her attorney Gloria Allred hold hands as they leave the Supreme Court building arguments in a Missouri abortion case, Webster v. Reproductive Health Services. The high court ultimately upheld the Missouri law in the case that made it illegal to use public officials or facilities for abortions. In his dissent, Justice John Paul Stevens said that a legislative declaration that life begins at conception violated the First Amendment. (AP Photo by J. Scott Applewhite, used with permission from the Associated Press)

In Webster v. Reproductive Health Services (492 U.S. 501), the U.S. Supreme Court in 1989 upheld several provisions of a Missouri law that regulated the performance of abortions. The Court refused to invalidate the law’s preamble stating that life begins at conception.

The Court in Webster also upheld several other provisions of the Missouri abortion law, including a prohibition on the use of public facilities or employees to perform abortions, a prohibition on public funding of abortion counseling, and the requirement that physicians conduct viability tests prior to performing to abortions.

While the bulk of the Court’s decision focused on due process and the meaning of Roe v. Wade (1973), Justice John Paul Stevens authored a partial dissenting opinion in which he argued that the law’s preamble violated the Establishment Clause of the First Amendment.

The general assembly of this state finds that:

Effective January 1, 1988, the laws of this state shall be interpreted and construed to acknowledge on behalf of the unborn child at every stage of development, all the rights, privileges, and immunities available to other persons, citizens, and residents of this state, subject only to the Constitution of the United States, and decisional interpretations thereof by the United States Supreme Court and specific provisions to the contrary in the statutes and constitution of this state. ...

In the case’s procedural history, the 8th U.S. Circuit Court of Appeals had invalidated the preamble, relying on the Court’s statement in Akron v. Akron Center for Reproductive Health, Inc. (1983) that “a State may not adopt one theory of when life begins to justify its regulation of abortions.”

The 8th Circuit determined that the preamble reflected the Missouri legislature’s impermissible injection of religious belief into law.

However, Chief Justice William Rehnquist determined that it was premature for the U.S. Supreme Court, a federal court, to determine whether the preamble was constitutional before it had been interpreted by the Missouri state courts. He also noted that the preamble itself “does not by its terms regulate abortion or any other aspect of appellees’ medical practice.”  He also called the statement in the Akron case “dictum.”  He, thus, concluded that the Court “need not pass on the constitutionality of the Act’s preamble.”

Stevens explained that “the preamble, an unequivocal endorsement of a religious tenet of some but by no means all Christian faiths, serves no identifiable secular purpose.”

Stevens also believed that the preamble was inconsistent with the essential holding of Griswold v. Connecticut (1965), a decision that struck down a ban on contraceptive use by married persons.