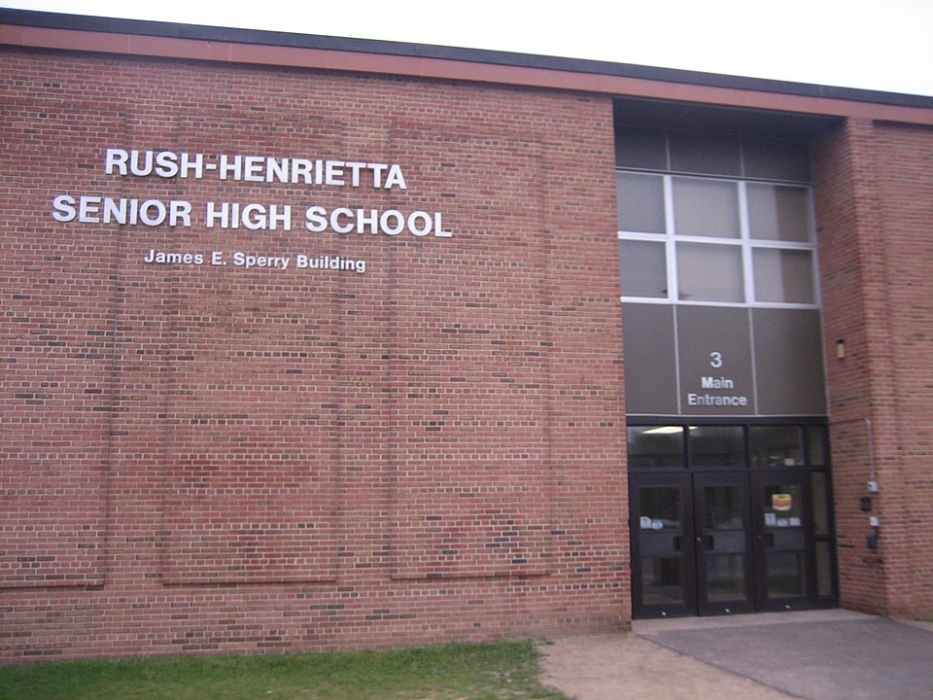 A high school art teacher at James E. Sperry High School in Henrietta, New York, was fired in 1970 after refusing to salute the flag during the Pledge of Allegiance. The 2nd U.S. Circuit Court of Appeals ruled that teachers have the same right to remain silent as students during the Pledge of Allegiance, a right recognized by the U.S. Supreme Court in 1943. (Photo by Wikimedia Commons, CC-BY-SA 3.0)

Although scholars have devoted considerable attention to the U.S. Supreme Court decision inWest Virginia State Board of Education v. Barnette, 319 U.S. 624 (1943), which ruled that students who were Jehovah’s Witnesses were not required to salute the flag in public school classrooms, they have paid less attention to the rights of teachers in similar circumstances.

A decision by a panel of the 2nd U.S. Circuit of Appeals in Russo v. Central School District, 469 F.2d 623 (1972), written by Judge Irving R. Kaufman, indicates, however, that public school teachers are covered by the same reasoning.

Teacher fired for not saluting flag during Pledge of Allegiance

The case arose in Henrietta, New York, when Susan Russo, a high school art teacher, was dismissed after she stood facing the flag with her hands by her side as a homeroom class, led by a senior teacher, participated in the pledge of allegiance that was broadcast over a loudspeaker.  Unlike the children in the prior cases, Russo did not cite religious beliefs but her “personal conscience,” and her belief that American society did not embody the “liberty and justice for all” that the pledge proclaimed. After the principal observed her behavior, she refused to resign and was fired.

The U.S. district judge who reviewed the case concluded that the school had fired Russo because of “(1) ‘her failure to follow school regulations,’ (2) ‘her refusal to teach a course in the art department,’ (3) ‘her lack of cooperation,’ (4) ‘her refusal to participate in the pledge of allegiance,’ (5) ‘her failure to perform all her duties,’ and (6) her involvement of the student body in her conflict with the school.’”

Observing that appellate courts rarely scrutinized findings of fact rather than of law, Kaufman observed that when findings were presented as mere statements without supporting documentation and contradict known evidence, then the appellate court had an obligation to give greater scrutiny.

In the case at hand, the lower court falsely imputed to Russo an unwillingness to teach a class that she had not even been asked to teach.  The other conclusions all appeared as restatements of her unwillingness to salute the flag, or what Kaufman described as “trimmings to cloak the conduct of the Board and to justify the court’s conclusions.”

Observing that the decision in West Virginia State Board of Education v. Barnette had clearly decided that the freedom of speech guaranteed by the First and Fourteenth Amendments includes the right to remain silent, Kaufman pointed to cases that established that teachers had similar rights.

Thus, just as the Supreme Court had in Tinker v. Des Moines Independent Community School District, 393 U.S. 503 (1969) upheld the right of students to wear black armbands in protest of the War in Vietnam, so too, an appellate court had decided in James v. Board of Education, 385 F.Supp. 209 (1974), that teachers had the same right, especially in cases where such actions did not lead to disruptions or violence.  Any regulations involving the speech of teachers needed to be “narrowly drawn,” so as to have “a ‘less drastic’ impact on the continued vitality of First Amendment freedoms.”

In this case, Russo was dealing with tenth graders who should be able to make their own judgments. There is no evidence that her behavior was disruptive or that she was seeking to proselytize. Free speech requires “breathing room,” and includes “the right to remain silent in the face of an illegitimate demand for speech.” The court accordingly reversed the lower court decision.

John Vile is a professor of political science and dean of the Honors College at Middle Tennessee State University. He is co-editor of the Encyclopedia of the First Amendment. This article was originally published on Feb. 28, 2020.